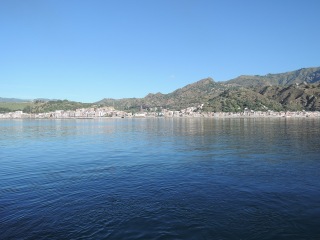 We woke up on Tuesday, May 14th in Taormina…  Actually, we weren’t in Taormina, but a coastal town near Taormina.  SeaDream was running a free shuttle bus to take cruisers to Taormina.  A lot of people also went on the excursion to Mount Etna, which I understand was pretty strenuous.  Some people were ill-prepared for the colder temperatures on the mountain.  One couple described the excursion and said they’d actually brought coats with them and they really needed them.

Bill and I went to the coastal town, but never made it on the shuttle bus to Taormina because I was still feeling pretty sick and was very tired.  The defining characteristic of my cold this time was overwhelming fatigue, and I ended up sleeping a lot on this cruise.  I wish I could have gotten up early as we sailed into Sicily, though.  I would have liked to have seen some of the scenery.  I had never been to Sicily before.

The coastal town wasn’t all that nice.  We walked around near the waterfront and were hustled by a couple of cab drivers looking to make some money.  One guy stopped us and gave his opinions about President Obama.  I also noticed a museum that looked like it might be interesting, but I didn’t have the patience to visit it.  If I had been feeling better, I definitely would have taken the shuttle SeaDream had arranged.

Etna is in the distance…

Beach… I probably would have enjoyed lying there for awhile.

As it was, we came back to the yacht and I had another long hot tub soak.  Job brought me more prosecco and I basked in the pleasant sunshine for awhile.  Once again, I really wanted to go swimming, but the water was very cold and I don’t think SeaDream opened the marina for swimming that day. 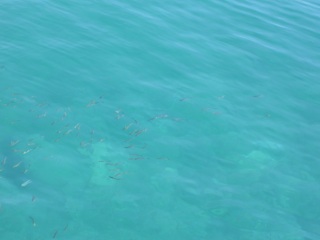 I really wanted to swim with these fishies…

SeaDream did allow water sports and I noticed a few people using the Wave Runners.  One guy even changed his shorts while on deck.  From my vantage point in the hot tub, I managed to see his bare butt for a second or two, even though he had sort of covered himself with a towel.  It was kind of shocking.  Later, another passenger mentioned to me that she had also seen what I saw.  We both wondered why he hadn’t gone to a restroom or his cabin to change.  But hell, people in Europe aren’t nearly as shy about nudity as a lot of Americans are.

I seem to remember having flounder for lunch, which I paired with an order of fries.  One of the waiters told me that we would be offered fish and chips later in the week. 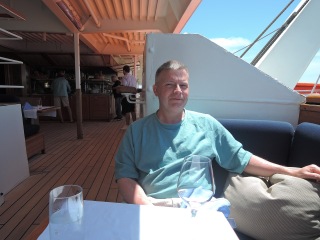 Handsome devil…  I think that’s our favorite place to sit.

I’d have to say I was feeling the yuckiest on Tuesday, so once again, I went to bed early and skipped the piano bar.  I fell asleep as soon as my head hit the pillow. 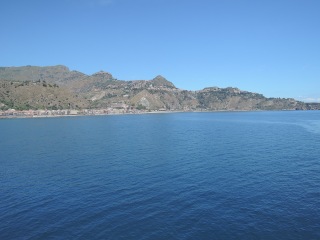 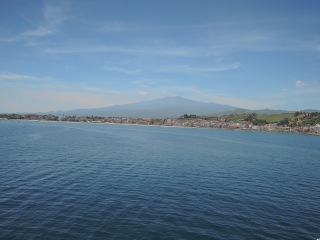 One of Manuel’s best margaritas…