We decided to make our next stop Beaumont, Texas.  It’s a bit over the Texas line from Louisiana.  That meant we would drive across the lower part of Louisiana on our third day of driving.  I thought it was interesting when we got down to Mobile, Alabama since the horse I owned as a teenager was born in Baton Rouge and purchased by a woman in Mobile who bought his mom when he was a foal.  Mobile was interesting, because that was when the wetlands started.  It was also cool to be so close to Florida and Mississippi at the same time.  But once we got into Louisiana, with its welcome signs in French and English, that’s when I noticed we were down in the bayous for real.

We stopped in Mandeville, Louisiana for gas and loaded up on some high octane stuff for my car.  I noticed that once the tank was full, I had a range of 567 miles!  Amazing!  My car holds about 15 gallons and we didn’t have to stop again for gas until we got to Flatonia, Texas, which is not far from San Antonio.

Anyway, after gassing up, I followed Bill and we had to detour through a parking lot to get back on the interstate.  A lot of traffic was coming and Bill and I got separated.  Some nice lady noticed me waiting in the parking lot to get on the road and very kindly let me in.  Yes, I bitch about inconsiderate drivers, but I also like to call out the ones who are nice.  She did me a solid.

I thought about pulling off of I 10 for a pee break, but decided I didn’t need to.  And then I saw the sign warning us that there were no more facilities for the next 20 miles.  Yup… there’s a nice bridge over some serious wetlands in Louisiana.  As we drove across, we encountered some heavy rain.  Wish some of it would hit Texas.

When we got to the other side of the causeway, we stopped for lunch at a Wendy’s.  Bill got me a burger that was smothered in mayo.  Pretty gross for a sweltering hot, humid day in Louisiana.  It actually felt like Hell outside.  I called my mom because she’d left me a message.  As Bill was fetching lunch and I was trying to handle the dogs, Mom laid a big guilt trip on me about attending Thanksgiving in Virginia this year.  I was kind of annoyed by the conversation.

Then we started back on the road.  The first thing I noticed when we crossed into Texas was how much nicer the roads were.  It reminded me of the time I took a bus trip from Yerevan, Armenia to Istanbul, Turkey.  As soon as we crossed into Turkey, stuff worked.

The second thing I noticed was that the exit mile signs start at 850.  There’s a sign that says it’s 850 miles to El Paso.  That’s a long way.

The third thing I noticed was that the speed limit went up to 75 miles per hour.  Of course, I couldn’t enjoy the higher limit because Bill was towing a UHaul and I needed to stay close to him.

We stayed in a La Quinta because they are pet friendly; I had never stayed in one; and they don’t charge pet fees.  The one we encountered on the west side of Beaumont was very nice.  It was right next to a Sonic, so Bill was able to get me some ice cream.  And it was very clean; the room was large; and the bed was very comfortable.  In fact, I actually went looking to find out what kinds of beds La Quinta uses. 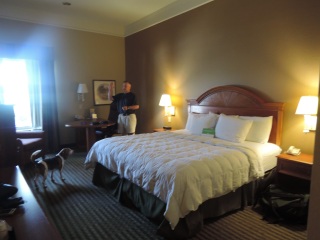 The bathroom had bare essential toiletries, but was functional. 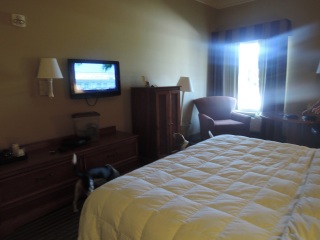 Nice view of the TV.

Arran decided to make a bed out of my duffel bag.

I can give high marks to the La Quinta Inn and Suites in Beaumont West.  They were pretty awesome to deal with.  Wish I could say the same about the next La Quinta we stayed in.