Our trip to The Netherlands via Luxembourg… part 13

So this morning, we got up early to come home to Germany.  We were checked out of the hotel by 7:40am.  Bill had a heck of a time negotiating the streets leaving Haarlem, thanks to a wonky GPS.  We finally found our way out and I saw a shot I regretted missing during our walks around Haarlem.  Now I have another reason to go back there.

I am really happy I took Rick Steves’ advice and stayed in Haarlem instead of Amsterdam.  Don’t get me wrong.  Amsterdam is pretty and full of excitement and things to do.  I just preferred the smaller, quainter, less overwhelming and crazy atmosphere of Haarlem.  It was also a lot cheaper to stay there and it’s only two stops by train to Amsterdam.  Haarlem is also very convenient to the airport.   So if we go back, we’ll probably stay in Haarlem again.  Indeed, I would book the Carlton Square Hotel again too.  We liked the location, the rain shower, comfortable bed, and the very generous free minibar.  The service was great, too.  It’s not a hotel I would necessarily recommend to the price conscious or really young folks– it’s a bit old fashioned and not so cheap.  I liked it, though.  I’m getting old.

This was our third stay in a Carlton hotel.  We’ve enjoyed all three in different cities.  Not all offer the free minibar, though.  We stayed at The Dominican in Brussels and the only free drinks we got came from the Nespresso machine. 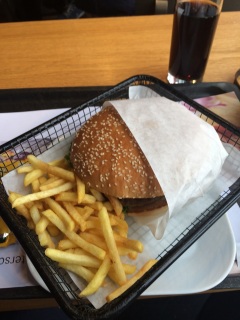 Today’s lone photo… lunch at a German truck stop.  I washed it down with Coke for once.

I ate a third and final space cake on the way out of Haarlem and it made the drive back more relaxing and less boring.  I should emphasize that I didn’t do any driving on the way home.  Bill generally does all the driving on our trips and operates on a strict no marijuana basis.  He’s also very careful about not drinking alcohol when he drives.

The only time I got slightly grumpy was when we stopped at a truck stop for a pee and some lunch.  Several tour buses full of elderly people got there at the same time we did.  The rain was pouring down and I just wanted a whiz, but they were all in line for the potty.  I knew it would take awhile and we had to pay 70 cents for the privilege.

Bill was annoyed when I said we should go to the next truck stop.  But he obliged me and fortunately it wasn’t long before we came upon it.  There was a crowd there too, but it wasn’t as populated as the first place was.  I was able to pee and enjoy my burger in peace.

We got home at about 3:40pm.  We unloaded everything and I started a load of laundry.  Bill went to get the dogs, who were delighted to come home.  Apparently, there were no fights between them during our trip, which is a good thing.

I don’t know when our next trip will be.  My mom is going to visit next month, so I’m sure we will be entertaining her with the local sights.  I’ll get back to looking for local gems.