A whirlwind trip to Austria, Italy, and probably Switzerland, part 2

Sunday morning, we woke up in Seefeld.  My back was a bit sore, probably because I’m used to sleeping on a feather bed.  The mattress at Hotel Diana was a bit firmer than that which my old back is accustomed.  I had taken a shower the night before and enjoyed it.  Hotel Diana doesn’t have a rainfall shower like the Moorhof in Franking did, but it was very clean and got great water pressure.  Unfortunately, my shoulders and hips were a little stiff.

We got dressed and went down to the breakfast room.  One of the ladies who had waited on us the night before was there in her dirndl.  I went to sit down, but she directed me to a different table, one in the middle of the dining room.  For some reason, there was “assigned seating”.  Before I could stop myself, I shot her a filthy look.  I can understand assigned seating when someone is serving you a full meal, but not for a breakfast buffet, especially since where I was about to sit was already set for two.  Poor Bill.  He caught the brunt of my side eye.  You’ll be glad to know that I didn’t make a scene, though.

We sat down at the assigned table in the middle of the dining room, and enjoyed the usual breakfast spread.  Hotel Diana offers meats, cheeses, cereals, juices, tea and coffee, as well as breads.  I was feeling a bit peeved about the waitress’s militant sticklerism for where we sat, so we decided to take a walk around Seefeld so I could burn off some steam. 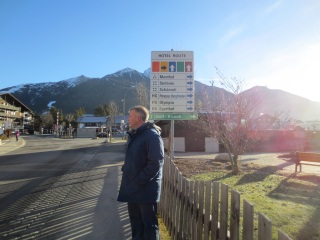 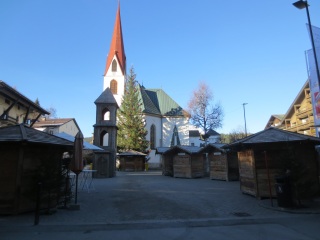 This church was connected to the Klosterbrau Hotel.  Very expensive digs! 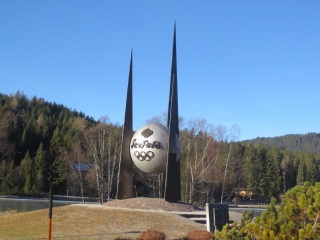 This is a town that is custom made for ski holidays.  I saw lots of people skiing down the slopes with artificial snow (for now).  People were ice skating, too.  If we’d wanted to, we could have hired a carriage ride.  I’m pretty sure most of the horses we saw were Haflingers, which is a breed native to the area.  All those hours I spent as a horse crazy kid studying horse breeds has paid off here in Europe, where I often see horses I never saw in the States.  Anyway, they were all well looked after and appeared to enjoy their work and the horsey aroma helped lift my spirits.  It was very cold on Sunday and all the cars had frost on them… 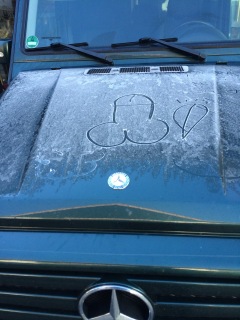 As you can see, someone took advantage of the frost.  This was parked right in front of a five star spa hotel.  I’m not sure why someone drew a penis on this person’s car.  It was funny to see, though.  Maybe it wouldn’t have been had it been my car.

One thing to know about Seefeld is that on Sundays, things are open.  There’s a huge Spar market next to Hotel Diana, as well as a smaller one near the center of town.  Most of the souvenir shops appeared to be open, too.  Bill and I didn’t do much shopping, though, unless you count the wine and liqueurs we bought. 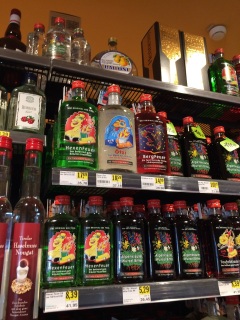 There was an impressive assortment of funny boozes…

We had plans to visit the Swarovski Crystal World in Wattens.  I had gone there alone on a tour with the Edelweiss Lodge back in June 2009.  I thought it was a really interesting place and figured Bill would love it.  I suggested that we go together, since we were conveniently located nearby.  Bill was game, though getting down the steep mountain road to get to the autobahn was a bit scary.  I’ll write more about that in a later post.  Suffice to say that if you have plans to stay in Seefeld, your car must have good brakes!

Crystal World was pretty busy on Sunday.  Bill and I happened to arrived at the same time as a large group of Russian tourists, who arrived in a late model luxury SUV.  The women were all dressed to the nines and a couple were wearing fur.  They seemed excited to be there and oblivious to everyone else.  In fact, they got in line ahead of us.  One of the ladies, doused in some kind of pungent cologne, was excitedly directing her husband which tickets to buy.  It turned out they were in the wrong line, though, since there were sixteen of them.

The museum costs 19 euros per adult if you’re not in a group   However, you do get a little break if you spend money in the shop at the end of the tour.  I came away from there with three new pairs of earrings.  I might have bought more, but the store was pretty mobbed and I was getting a bit stressed out by the aggressive crowds.  Besides, as much as I like sparkly stuff, I don’t tend to take good care of my “pretties” as Bill puts it.  I’m not good about dusting and almost never entertain, so buying pretty knickknacks is kind of a waste of money for me. 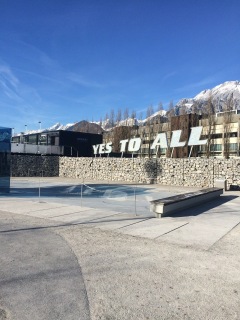 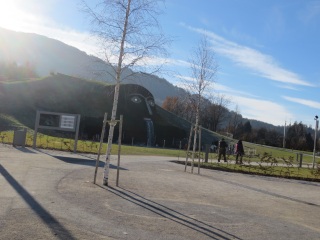 Crystal World was just as cool as it was when I visited in 2009, though the throngs of people made it somewhat difficult to enjoy everything fully.  Lots of folks were stopping to take selfies and pictures of the exhibits.  I didn’t take any selfies, but I did snap a few photos to go with the ones I took in 2009.  The exhibits are mostly the same, though I did see a few different ones this time.  It’s a great place to go with kids.  They do have reduced admission prices and family prices available. 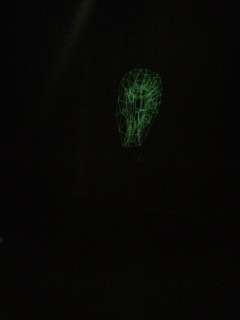 This is a blurry picture, but the exhibit was cool.  You stand in the light and the lasers put on a show for you.

Walking into a giant crystal. 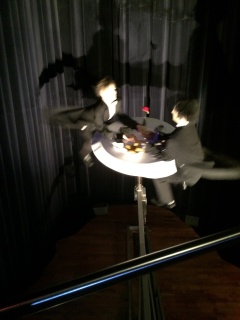 A frozen pond in Seefeld. 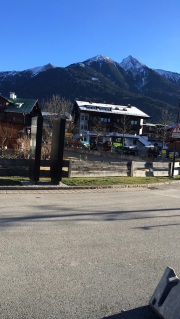 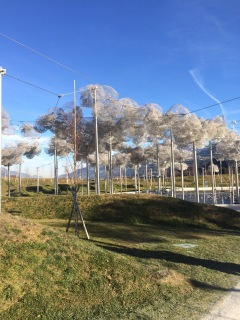 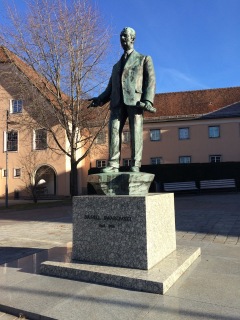 A statue of Daniel Swarovski in the town of Wattens. 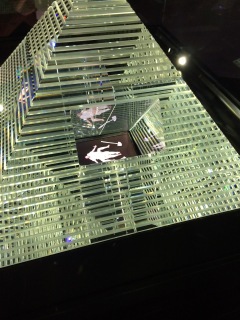 And the Taj Mahal.