Because we are going to attend a gathering next weekend, I needed to visit the PX at Panzer to purchase a cake carrier.  When we were finished shopping, it was about 4:00pm.  Bill and I had talked about visiting the Irish pub in Herrenberg, but noticed that their food offerings were kind of skimpy.  Since we were hungry and Vaihingen is not far from Panzer, we decided to head there.  Instead of visiting The Auld Rogue as we usually do on Sundays when we’re in the neighborhood, we decided to visit their neighbors at the Wirtshaus Drive Biergarten.

Bill and I had noticed the Wirtshaus Drive Biergarten when we lived here the first time, from 2007-09.  We lived at the Vaihinger Hof for six weeks and really got to know Vaihingen’s restaurants pretty well because we ate out all the time.  For some reason, we never visited this particular restaurant when we were here the first time, nor had we gone there prior to its recent renovation.  I had noticed how nice the place was looking since it was redone, even though we had never been in there before.  It looks like they bought the building to the left of the original structure and about doubled the size of the restaurant.  Since they open at 4:00pm on Sundays, we decided to have a look.  As it turned out, it was a good thing we got there early.

Bill and I awkwardly sat down at a booth close to the door and not far from the impressive bar.  I was admiring the beautifully made tables and benches.  They are very solid and high quality.  It took some time before the bartender approached us.  I didn’t realize that he was working alone and was feeling a little weird.  At first, I suggested that we just have a drink and then head to The Auld Rogue.  But then, maybe after we’d been sitting for about ten or fifteen minutes, the bartender came over.  He was friendly, spoke excellent English, and very quickly brought us our first round, a Bock and and a Keller Bier. 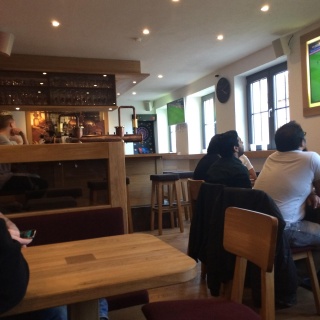 The bar area.  Note the dartboard on the right.

Obligatory shot of Bill.  He was mid sentence. 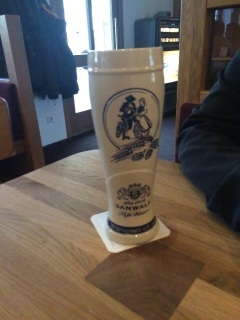 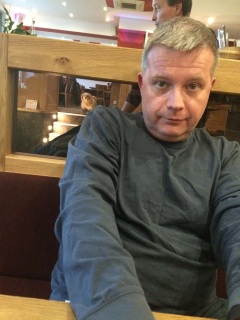 Look over Bill’s left shoulder at the dog, who was working the tables the whole time we were there.  That dog is obviously a fixture.

The restaurant began to fill up as we waited for our dinners.  Before long, all of the seating near the bar area was taken.  It wasn’t long before I realized that Bill and I were sitting in prime real estate as far as bar patrons were concerned.  Lots of people were having to settle for the dining area in the newer part of the restaurant.  For some reason, they didn’t turn on the TV in that area. 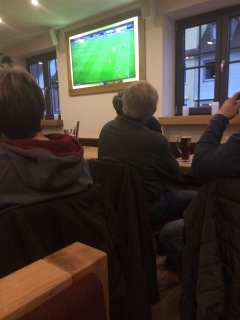 Our food arrived fairly quickly… and it was enough food for four people!

My pork ribs, which came with delicious potato wedges and a garlic and dill dipping sauce that was very addictive.  I have had better ribs, though these were not bad at all.  The barbecue sauce was a little mild for my taste, and that’s really saying something.  On the other hand, that dip for the potatoes was like crack.

Bill’s garden variety schnitzel.  This was nothing to write home about, though Bill enjoyed it.

Both dishes came with salads dressed with a mild yogurt dressing.  I appreciated that they also brought us ketchup and mayo for the potatoes.

I managed to finish the ribs, but still had lots of potatoes left.  Bill ate about half of his schnitzel and neither of us got more than half of our salads down.  We were able to take the leftovers to go, though I doubt they gave me the garlic sauce.  That was the best part of the meal! 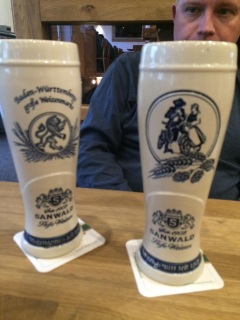 We decided to have one more round…  and the place got even busier! 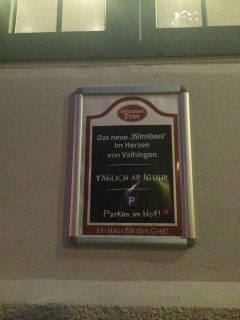 As the sun went down, more people crowded in.  I started to watch the football game and  I’ll be damned if it wasn’t exciting.  It was a match between Stuttgart and Schalke.  I don’t usually follow sports, but I caught myself enjoying the camaraderie in the restaurant.  The place was mostly full of Germans who cheered loudly for each exciting and impressive play, even when the guy on the Schalke team did a cartwheel after scoring a goal.  I think I wouldn’t mind watching soccer over American football.  For those who want to chastise me for that, realize that I don’t follow team sports at all!  Neither does Bill.

When things were really rocking in the restaurant, we decided it was time to pay up and go.  Just as Bill asked for the check, a tall German guy asked if he and his family could share our table.  Bill made his evening by telling him we were leaving sofort.   The guy brightened up and thanked Bill as he and his family swooped in and snagged our table.  Bill paid our 38 euro check and we split… sofort.

We really enjoyed our visit to Wirtshaus Drive.  Though we didn’t get a chance to see this establishment before they fixed it up, we were impressed by how nice it looks inside after the obviously extensive renovations.  It’s clear the owners invested a lot of money into upgrading the restaurant.  We also peeked at the biergarten and determined that when the weather is better, we will have to visit so we can try it out.

The food at the restaurant is fairly good.  I’ve had better and I’ve had much worse.  Next time, I may opt for a pasta dish.  We liked the bar because it’s comfortable and offers a different vibe than The Auld Rogue does.  While we’d probably go to The Auld Rogue for its fine whiskys, Irish beers, good food, great music, and American clientele, Wirtshaus Drive offers a refreshing change of pace in a very pleasant environment.  If you want to visit on a game day and sit near the bar, I recommend getting there early.  I’m sure we’ll be back.

P.S. On the way home, we passed the Haslacher Hof and noticed that they, too, were watching the same game on huge TVs.  I could see it from the road as we drove by the restaurant.  Maybe it’s time we resubscribed to German cable.  I think I could get into football and maybe it would help me learn German.