Winding down in an hourlong Stau… coming home

Sunday morning, we got up and packed the Mini with all of our stuff.  After a nice breakfast, we checked out and headed toward Austria with plans to spend one night in Salzburg on the way home.  I was actually looking forward to going to Salzburg.  We were there once in 2012, when we took our very first military hop to Europe.  I ended up getting us a blind booking on Germanwings.  We flew from Cologne to Munich, spent a couple of days there, then took a day trip to Salzburg.  I remember wishing we’d based in Salzburg instead of Munich because I thought the town was so pretty.

We plugged in the GPS and decided to drive through Klagenfurt, Austria to see if it’s worth a future visit.  The drive out of Slovenia to Klagenfurt was rather scary, because it involved driving through some very steep Alpine passes.  Poor Bill had his foot on the brake the whole time and was kind of freaking out, especially when we got to the Austrian side of the border.  Incidentally, there was a passport check, though the border patrol seemed to wave through anyone with Austrian plates.

We drove around Klagenfurt, but weren’t inspired to park and walk around for awhile.  That doesn’t mean it’s not a nice town.  It just means we were a bit tired and on a Sunday morning, things were looking pretty dead there.  I was curious about it because when we did our first hop, I was looking at potential blind booking cities and Klagenfurt was among them.  The pictures I’d seen of Klagenfurt made it look like a nice town.  In retrospect, it’s a good thing we didn’t stop.  Just after we left Klagenfurt, the GPS added an hour to our travel time.

“What the hell?!” Bill exclaimed as he checked the GPS, which I consider the bane of our existence.  Apparently, there’s some major construction going on in the tunnels and they have one shut down.  Since it’s the main route north and many people were heading that way, we were pretty much forced to endure yet another stressful traffic jam.  I entertained us with old Kenny Rogers songs on the iPod. I don’t need to describe what it’s like to sit in a traffic jam for an hour, though being on a mountain while driving a stick definitely made it more tiring.  I saw lots of guys casually doing their business on the side of the road, too.  😀

By the time we got to Salzburg, it was mid afternoon.  Bill and I were both exhausted and a bit exasperated as we pulled into Haus Arenberg for the night.  Any thoughts we had of walking into the city disappeared, especially when the sky clouded up and it started to rain.  But we did enjoy a couple of nice beers out on the patio and listened to some fun German folk music on TV while sipping Slovenian wine and eating chips and cookies.  Bill said our evening repast reminded him of Odd Todd.

This is a pretty funny cartoon…  I relate on many levels.  Todd is a fan of making a meal out of chips and cookies, too.

We also watched an interesting reality show about horsey people in their 40s and 50s looking for love.  Since I grew up around horses, that was pretty interesting for me, even if I didn’t understand everything.  We probably should have gone ahead and gotten German cable TV again.

Yesterday morning, we loaded up again and headed into Germany.  We were prepared for another delay at the border, since we saw one the week prior on our way to Austria.  German authorities were checking passports.  In fact, on Sunday, they were checking passports and there was a twenty-five minute delay getting across the border.  But yesterday, it was pretty smooth sailing.  I was even pleasantly surprised by the usually perpetually backed up A8.

Bill picked up the boys while I did the laundry and cleaned up some old food we neglected to toss out before we left.  I heard a smoke detector chirping, as they usually seem to do after we’ve been on a trip.  We changed the battery.  I wrote some hotel reviews and am pretty much done blogging about this trip.  We had a wonderful time and I truly hope we have another chance to visit Slovenia.  If we make it to Croatia during our time here, I will definitely make a point of spending a couple of days there in a different area.  It really is a cool place. 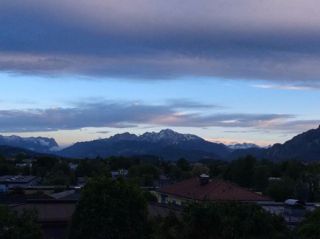 I already miss the views…  This was from our balcony in Salzburg after a rain storm.

Stay tuned for my ten things I learned post.  I think it will be fun to write!  I don’t know when our next trip will be, though I’m definitely prioritizing Ireland and Berlin, two places I must see before we move out of Europe.  I don’t know when that will be, so we need to take those trips sooner rather than later.