Rheinfall: a quick and easy day trip from the Stuttgart area!

I don’t know how, but somehow we missed Rheinfall (Rhine Falls) the first time we lived in Germany.  In fact, I’m sorry to say that I never heard of it until we moved here the second time, two years ago.  I’m glad we finally found out about this magnificent waterfall in Switzerland.  It would have been a real shame not to have seen it at least once.  It has the distinction of being Europe’s largest plain waterfall.

After last weekend’s successful outing to Riquewihr, France with our dogs, Zane and Arran, I decided this weekend, I wanted to go to Switzerland.  I gave some thought to enjoying an overnight in Schaffhausen, which is a decent sized town near the waterfall.  I looked at places to stay, but finally gave up on the idea when I realized that Rheinfall is really not that far from Unterjettingen, which is where we’re living.  On a good day with normal traffic flow, it takes less than two hours to drive there.  We woke up to pleasant temperatures and sunshine today, so it seemed like the perfect day to visit.

We loaded up the dogs, packed some water and a bowl for them, and set off for Switzerland down A81.  I was enjoying the beautiful scenery as we headed further south, at least until we hit the first of several Staus (traffic jams).

If you are driving and don’t already have one, you’ll need to stop and buy a vignette, unless you plan to stay on secondary roads.  They cost 40 Swiss francs, though you can also pay for them in euros.  The sticker for 2016 is good until January 31, 2017.  Otherwise, you can also easily reach Rheinfall by train.  There is a station literally right by the falls.

Rheinfall is literally just a few miles into Switzerland.  We already had a vignette because we visited Switzerland in December 2015.  We figured we might as well get our money’s worth.  Once you reach the Rheinfall area, you have to decide if you want to visit the north shore or the south.  We chose the north shore because of the dogs; it’s basically a public area.  The south shore has a castle on its grounds which offer attractions.  We parked at the first lot we encountered.  Today was a very busy day.  I watched the lot quickly filling up as Bill went to pay for three hours of parking.  As the lot was filling up, Zane and Arran were whining and annoying a couple of women trying to have a conversation near us.  That was the worst of their behavior today.  Again, euros or francs are accepted for parking, though people seemed to be very confused by the machine where the tickets were dispensed.  Bill paid five euros for three hours (2 CHF per hour).

Once we paid for parking and I made use of the free bathroom facilities, we started the fifteen minute walk to the waterfall.  Those who don’t want to walk can take a little train/tram thing.  It costs money to ride the train, but it takes you all the way to the bottom of the waterfall.  Those who have mobility problems may want to consider taking the train.  There are lots of steps and hills to climb. 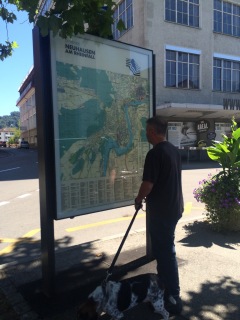 Bill checks out the city map in Neuhausen, which is the community where the north shore of the river is located.

Along with many, many other people, we made our way down the steep hill to the river.  The place was teeming with people and quite a few had brought their dogs with them.  Zane and Arran made fast friends with a friendly beagle.   I was pleased to discover there was no entrance fee to see the waterfall.  You just have to pay for parking. 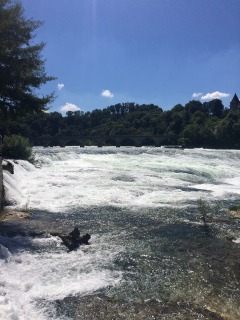 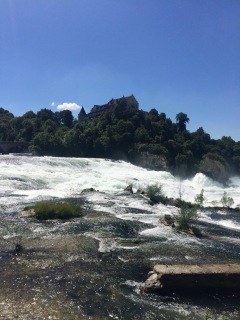 My first few dramatic views of the falls…  They were beautiful, loud, powerful, and putting off a refreshing spray.

It was about 12:45 when we arrived and I was feeling pretty hungry.  Luckily, there was a very expensive snack bar handy.  I sat down with the dogs and Bill went to fetch us some lunch.

For some reason, lots of people were posing with this fake cow.  I decided not to because I figured it would be asking for trouble.

Bill brought me a nice locally produced Swiss beer.  This is a Falken lager, made in Schaffhausen.  It was kind of a nice change of pace.  Didn’t taste like a German beer.  It had more of a malty flavor.

We also had very fresh butter pretzels and brats.  Bill bought a bottle of water for the dogs.  All of this cost about 33 francs, which is roughly $33.  Switzerland is expensive!  Budget conscious folks may prefer to bring a picnic lunch.  On the plus side, this simple lunch was restorative.  I felt a lot better after we ate.  Zane made friends with an adorable little Indian girl of about two who bravely came over to pet him.  She was a lot more courageous than the little Dutch kids they met last weekend.

More dramatic shots of the falls.  Notice the rock in the middle.  You can take a boat out to the rock and climb up.  We didn’t do it because we had the dogs and because the rock was *teeming* with people.  It was very obnoxiously crowded!

Obligatory shot of bearded Bill posing in front of the falls. 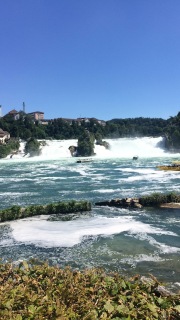 And one last shot right in the center.

This is a train that takes people to and from the falls.

I got a kick out of this sign in several different languages warning people of death.

We walked around a bit, but soon got tired of the extreme crowds and heat.  We walked up a gently sloping road instead of the extremely crowded steps we walked down to get to the bottom of the falls.  I think the road is probably the better way to access the waterfront at the bottom of the falls.  It’s a lot less crowded, not as steep, and you don’t have to contend with people paying closer attention to their phones than where they’re going.

But before we walked back up, I stopped in the bathroom and got a kick out of another sign.  This one was explaining how to use the toilet properly.  It was entirely in English.  I noticed that the people before me didn’t follow directions very well.

FYI:  An elevator is available.  You can take an elevator from the train station to the access road we walked up on, and then this elevator from the road to the bottom of the falls.  This is another option for those who don’t want to bother with the steep hill or crowds.

It was great to finally see Rheinfall.  If we’d wanted to, we could have found plenty to do all day there.  The area is very dog friendly, although I’m not sure how dog friendly the castle on the south shore is.  I did read on TripAdvisor that dogs are welcome all over the area.  Had it been less crowded, maybe we would have tested out that theory a bit more.  Today, it was just overrun with people!  But we did have a good time and it was a nice way to spend a Sunday afternoon.  Maybe we’ll visit again in the fall.  I bet it’s beautiful there when the leaves are changing colors.

Pro-tip: If you plan to use your cell phone in Switzerland, remember that it’s not part of the EU and roaming charges will add up quickly.  I went through about 54 Euros in less than a couple of hours.