Sausages at the Sindelfinger Paulaner Bar…

Today, Bill and I decided to take an exciting trip to Panzer to pick up a few things.  I bought some new makeup, a couple of dog toys, a couple of picture frames to replace two that broke, and a new Bose SoundTouch 20.  I am now fruitlessly trying to entertain myself getting the new SoundTouch working and wishing things were as simple as they were when I was a kid.  Back then, we pleased ourselves with cassettes and CDs.

After we did our shopping, we decided to go into Sindelgfingen and try the Paulaner Bar.  It’s right across the street from the big Stern Center and close to the Turkish supermarket on the main drag into town.  I had spotted the Paulaner Bar on an earlier visit to Sindelfingen and thought it looked interesting.  The restaurant doesn’t have much of a Web site, but we did notice that it’s open from 11:00am until midnight every day.  It also has some dedicated parking spots in a garage around the corner.  The spots also appear to be free of charge, although you must use your Parkschein.

There’s a pleasant looking outdoor area that I suspect will be history as the weather gets colder.

So, anyway, we showed up at about 1:00pm.  We opened the door and noticed a few tables were occupied.  A cheerful looking young woman sporting a dirndl greeted us as we took a seat.  We were invited to choose whichever table we wanted.  I noticed there was a cozy looking bar, but since the place wasn’t very busy, we took one of the smaller tables.  It appeared to seat about six people.

The vantage point of the bar from our table.

The inside of the Paulaner bar is kind of dimly lit and, if I’m honest, a little depressing.  It could be because it was so quiet today.  A lot of people are probably enjoying the last day of the of Canstatter Volksfest and, let’s face it, there are plenty of places where one can enjoy a German repast in these parts.  Nevertheless, although the ambiance was a little depressing today, the inside of the restaurant is kind of quaint, if not a bit grungy.

Naturally, this restaurant has the kind of food you’d expect at a German beer bar.  There are sausages, salads, schnitzels, schweinsaxen, sauerbraten, soups…  yeah, it’s pretty much a plethora of German specialties beginning with the letter S.  Bill was thinking about having a Hawaii Toast when I told him I wasn’t feeling like having a big lunch.  But then the waitress told him they couldn’t make Hawaii Toast today.  We both settled for sausages.

Bill had brats with brot. pictured below.  He said the brats were actually pretty nice.  They were well seasoned and fresh and there was plenty to satisfy him. 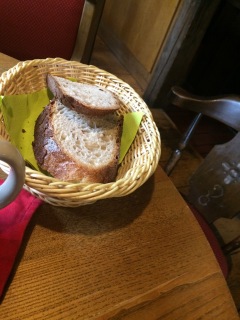 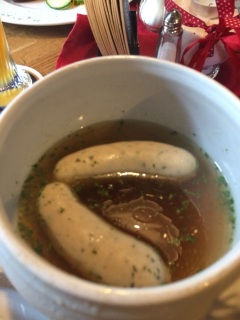 I went with the Weiss Wurst.  These two little white sausages were served in broth with a pretzel (pictured below).  The only thing missing was mustard.  Likewise, this was plenty, and cheap, to boot.  I think my selection was under five euros.

I noticed the Paulaner Bar participates in the Nette Toilette program.  Basically, what that means is that they don’t mind if you come into the restaurant to pee if you’re walking around town.  Some towns in Germany have adopted this program.  Restaurants get paid by the city to let people use their toilets.  That way, the taxpayers don’t have to pay to build and maintain public toilets, restaurants get more people coming in and possibly ordering something, and fewer people pee outside.  I think it’s a great program.  The only other local area I’ve seen the Nette Toilette signs is Calw, though I know this is something that is done around Germany. 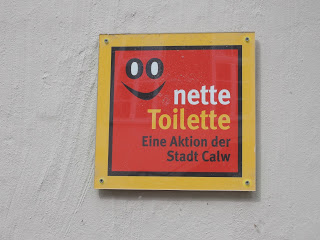 This sign is from Calw, but the ones in other areas look the same.

After our round of beer and sausages, we decided to head home.  On the way out of Sindelfingen, we ran into a large crowd of motorcycle riders.  Below are a couple of pictures I snapped of the action.  Unfortunately, I missed getting one of the guys dressed in pink bunny suits.  You just never know what you’re going to see when you drive in this area.

Anyway, our lunch today was pretty low key.  The food was fine and the service was cheerful and pleasant.  The mood in the Paulaner Bar was pretty downcast, but that could have to do with extenuating circumstances.  It’s probably a lot livelier on a Friday or Saturday night.  I’d say it’s not a bad place to go for cheap eats in Sindelfingen, although Funzel probably has more selection and better quality food.  If I were taking someone to a German place in Sindelfingen, I’d probably pick Funzel over the Paulaner bar in Sindelfingen; the Paulaner Bar in downtown Stuttgart is a bit better.