Bill and I didn’t go out yesterday.  The weather was horrible.  It was dark, cold, and rainy, and a lot of stuff is closed on Sundays in Germany, anyway.  If we’d put our minds to it, maybe we could have found something to do, but I wasn’t in the mood to go out.  Instead, we stayed in, watched a lot of TV, and drank cocktails.

I do still have a work ethic, though, despite having long ago given up the working woman’s lifestyle.  I felt kind of guilty for neglecting the travel blog yesterday, since there are a handful of people who follow it and look for new posts.  I usually update on the weekends if I haven’t gone out of town.  Saturday, I was successful, but yesterday I was not.  So… today, I decided I’d write about the differences I’ve noticed between living in Wiesbaden and living near Stuttgart.

Bear in mind, I’ve only been in Wiesbaden for two months.  And our lives have been affected by the weather, the holidays, and the fact that we’re just now getting used to the area and finding stuff.  As it is every time we move, I’m having to get used to a new rhythm.  Yes, Wiesbaden is still Germany and some German stuff is universal to the experience.  But just as it would be in the United States, there are some differences.  So with that idea, here are ten differences in life in Wiesbaden versus life near Stuttgart. 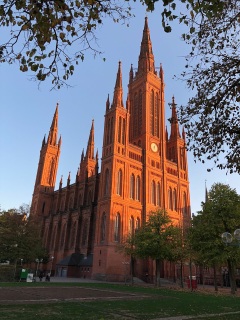 I don’t know why, but I was under the impression that life was more bucolic up here in Wiesbaden.  Maybe it’s the name of the city, which translates to Meadow Bath.  To me, Wiesbaden is more crowded than the Stuttgart area is.  There are many narrow streets here– even more than down in Stuttgart– and they are crowded with cars.  I was thinking we’d be able to find a rural area in which to live, but just about everywhere we looked was very built up and crowded.  That may be because there are several good sized cities here as opposed to just one.  We have Frankfurt, Mainz, and Wiesbaden, all of which have at least 500,000 inhabitants.

9.  People are more laid back in Wiesbaden.

Despite the area being more “crowded”, I have noticed people don’t seem as cranky in the Wiesbaden area.  Or maybe I’m just becoming German…  I remember being taken aback when we moved to Stuttgart the first time.  People seemed grouchy and “in your face”.  It seemed slightly less like that during our second stint there, probably because I was more accustomed to German bluntness.  Here in Wiesbaden, I wouldn’t say people are necessarily friendlier, but they seem less uptight for some reason.  Maybe I should spend more time in traffic.

I don’t know why, either.  It’s not that there isn’t a lot of traffic.  There is.  But for some reason, we don’t experience the legendary Staus we did in the Stuttgart area.

7.  Wiesbaden is not as pretty as Stuttgart is…

Actually, I should rephrase that.  The city of Wiesbaden is very beautiful and posh.  Stuttgart is kind of industrial and homely.  In that sense, I’d say Wiesbaden is prettier than Stuttgart is.  However, the areas around Stuttgart are absolutely lovely, while Wiesbaden’s surroundings seem to have less beauty, natural or otherwise.  I really miss the beautiful views from our old house, as well as the charming towns that weren’t decimated during World War II.  Forgive me, but I’m not as well-versed in history as I should be.  Nevertheless, there’s not as much quaint charm in the Wiesbaden area.  It takes more effort to see the half-timbered houses one sees in BW.

6.  Wiesbaden is more international than Stuttgart is.

I come from Virginia and sometimes, when I compare Wiesbaden to Stuttgart, I think of what it would be like to move from, say, Richmond, to northern Virginia.  Stuttgart feels very much like the state capital it is, while Wiesbaden, being so close to Frankfurt, feels more like the national capital it isn’t.  A lot of different kinds of people come through Wiesbaden because it’s close to Frankfurt.  Consequently, it feels somewhat more cosmopolitan, although I’ve read that if you really want to party, you need to go to Frankfurt or Mainz.  Wiesbaden apparently has a reputation for being “stuffy” and “snooty”, thanks to all the money up here.

Swabians are reputed to be tight with their money.  Nevertheless, I thought Stuttgart was an expensive area to live in.  That was before I went looking for a house in Wiesbaden.  We pay almost twice as much (including Nebenkosten) for our current home than we did for our house in Unterjettingen.  However, our new house is also much nicer than our last one was.  Our landlord lives next door, but never bothers us… and when something needs to be fixed, he doesn’t freak out.

One thing I miss about our old area is that we lived near several farms where we could buy produce on our honor.  I won’t say this doesn’t exist in Wiesbaden, but it’s harder to find it.  I’m not sure we’ll find a 24 Milch Tankstelle up here, either.  On the other hand, up in the Wiesbaden area, there are wine stands.  They should be cranking out Federweisser soon.

3.  The food is kind of different and there seems to be less emphasis on beer.

In the Stuttgart area, the emphasis was on heavy, hearty German fare in the Gasthauses and there were many different breweries, all putting out beers that pretty much tasted the same.  Up here in Wiesbaden, the emphasis is more on wine.  I thought Stuttgart was wine country, and it kinda is, but it’s even more wine country near the Rhein.  I suppose if I want a good Volksfest, I’m going to have to pack my dirndl and pay Stuttgart a visit.

2.  Wiesbaden is growing on me…

It’s nice to have a change in scenery.  I’m looking forward to spring, when the weather will be better and we can take some day trips on the weekends.  The weather up here, by the way, seems to be less cold and snowy.  When I read about snow in Stuttgart, I look out our window forlornly and see nothing but rain.  But maybe it will be somewhat milder all the way around.  Like, in the summer, I won’t bake.  One can hope.

1.  But I kind of miss Stuttgart a little, too…

If the weather has to be cold and yucky, I like it to snow.  We have yet to have our first decent snow up here.  I know the town where I used to live has gotten some white stuff.  I miss having a nice area to walk my dogs, too.  We were literally next to the Black Forest down in the Stuttgart area.  Here, they get walked by a grocery store near the Autobahn.  On the other hand, we do have a fenced in backyard, which is great.  Still, I was thinking wistfully about how beautiful the rural areas near Stuttgart are.  I do miss them.

I may have to revise this post after we’ve been here a bit longer.  I’m making a list of places to see on the weekends, once the weather is nice.  I look forward to day trips to the Rhein, at the very least, and new castles.  I miss the mountains, though.  Maybe I’d feel differently if we’d lived in Wiesbaden first.