Sunday morning, I woke up at about 3:00am.  I couldn’t help but notice the sun was already rising.  Sweden is a bit weird for the uninitiated, especially in the winter and summer, when days are either really short, or really long.  A few hours later, we got up for real, enjoyed the awesome rainfall shower, got dressed, and headed to the 25th floor for breakfast.  At Upper House, breakfast is always included in the rate.  You get a very nice buffet, as well as “small plates”, which are prepared by the chef.  Most people get two or three of the small plates, as well as whatever they want from the buffet. Below are a few photos of items we enjoyed over the course of our two night stay. 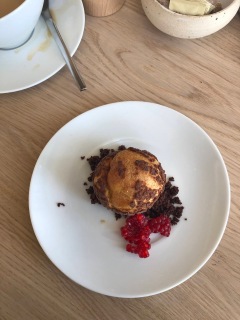 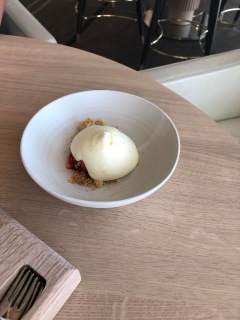 Delicious strawberry crumble with cream.  I think this one was my favorite. 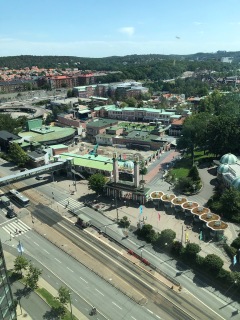 A view of the city.

On day two, Bill had the royal and the shakshuka, a dish of eggs poached in a sauce of tomatoes, peppers, and garlic.

At 11:30am, we headed to the spa for our massages.  One thing I want to mention about the spa in Sweden.  It seems that when it comes to nudity, the Swedes are more like the Brits and us Americans.  We were advised to come dressed in our bathing suits.  Even in the locker room, there really weren’t any places to change in privacy.  So, if you’re reading this in Germany and you want to visit the Upper House spa, be advised that it’s NOT textile free, even in the sauna.  In fact, we even had our massages while wearing bathing suits, although they were rolled down.  We were fully covered the whole time.

Our aromatherapy massages went on concurrently– Bill and I were in the same room with two female therapists.  We spent 80 very peaceful minutes getting the knots knocked out of our tired muscles, although the bed at the Upper House was the very best of all four hotels we stayed in this week.  Then, we checked out the amazing spa area with its views of Liseberg. 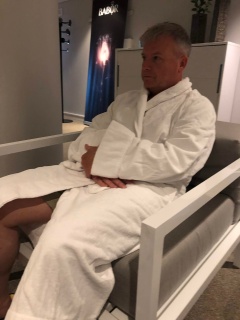 Bill in his snazzy robe.  I brought mine from home.

This pool is 18 floors up and has a glass bottom… Yes, it’s very secure, and yes, you can see to the street when the water isn’t bubbling. 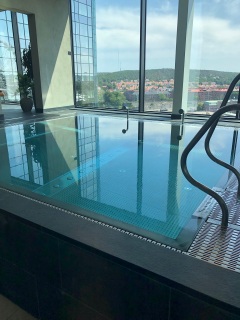 A saltwater pool…  It had jets.

A peek at the pool from the ground floor of the towers.

After a few pleasant hours in the spa, we were hungry.  We got dressed and went looking for food.  Unfortunately, just as it is in Germany, a lot of Swedish restaurants also take a “pause”.  Consequently, we ended up at Ristoria, an Italian eatery in the towers.  They had a Sunday brunch, which didn’t really please me much.  The food wasn’t bad, but it looked like it had been sitting for awhile.  Also, the chairs were uncomfortable.  But it satisfied my hunger well enough… 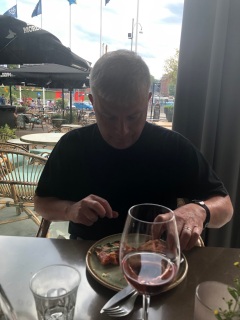 From the buffet at Ristoria.  It should be mentioned that cash isn’t accepted anywhere in the hotel or restaurants, so bring your credit cards.

One drawback to Gothia Towers’ location is that it’s not close to downtown, nor is it in a particularly walkable location.  Moreover, while we were in the spa, I overhead a guy telling the staff that he was robbed.  So after we finished lunch, we went back to the room.  I proposed a visit to Liseberg to Bill, but he wasn’t interested.  He doesn’t like rides, particularly ones that are extremely high or just plain extreme.  I will admit, while I wouldn’t have hesitated to ride most of the rides at Liseberg when I was younger, they did seem a bit extreme, even to me.  And I don’t like crowds or being part of a captive audience… so we decided to hang out and talk.

At about 5:00pm, we went to the Upper House’s bar and proceeded to spend the evening drinking… and talking to a British woman named Janet who lives in Doha, Qatar and works in the airline industry.  Bill struck up a conversation with her when she said she wanted to sit out on the balcony.  The wind up on the 25th floor was extreme, but Janet said she had been dealing with 50 degree weather for weeks and she wanted some fresh air.  Dopey me… I thought she meant 50 degrees Fahrenheit.  Nope… 50 degrees Celsius.  That is some HOT weather!  No thanks!

Janet was a total stranger prior to last Sunday, but she turned out to be a lot of fun to talk to.  She also reminded me a lot of my sister, Becky.  She said she was going to have to get up very early on Monday morning to fly to Stockholm for business purposes.  Then, I guess, she was going back to Doha…  We had a lot to talk about, though, since it turned out we liked the same kind of music and had lots of travel stories to share.  We found ourselves talking about everything from 9/11, Princess Diana and where we were when she died (I was in a sleeper care with a Chinese family on a train from Vienna to Venice) to her trip to Vietnam and, of course, religion and politics.  She even kissed us goodbye!

This was dinner… two small plates.  Pork belly and some kind of sea scallop soup.  I was partial to the pork, but that probably surprises no one.

The next morning was the day we picked up our new car.  Things got off on the wrong foot, when the elevators wouldn’t work.  We had to climb a tight spiral staircase to get to the restaurant.  Then, while we were eating, our waiter came over and said Volvo had sent a taxi for us.  Bill was upset, since he was told they wouldn’t come until after 9:00am.  But he never got any confirmation one way or the other and, I guess, trusted that things would go according to plan.  He was pretty upset that we weren’t ready for the taxi and they hadn’t told us it was coming.

After breakfast, we went to the reception and explained what was going on.  A very beautiful blonde woman with delicate features and big blue eyes was running the desk.  She offered to call Volvo for us and find out what to do.  Meanwhile, we went back to our room to wait.  While we were there, I noticed the below sign.

This is pretty awesome!  If you smoke in your room, they’ll charge you a lot to clean it.  Then, they’ll donate half of the fine to Sweden’s Heart and Lung Foundation.  I love the sense of social responsibility the Swedes have. 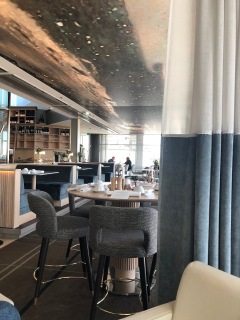 One more view of the dining room.  Next time, we’ll be sure to reserve a table for dinner.  Upper House has a restaurant with a Michelin star.

Volvo agreed to send us another taxi at 10:40am, so we waited in our room, checked out, and hung out in the lobby to wait for yet another taxi driver driving a Volvo to take us to our new wheels.  I prepaid for the room, so the only bill to be settled was for our dual massages and drinks in the bar.  It was about $400.