After coming back to and cleaning up Arran’s chocolate disaster last night, Bill and I decided to venture out for dinner.  We could have gone to an Asian restaurant, which had food that smelled good and probably would have been a nice change of pace.  But I really wanted Italian style pasta, which I had missed on our last two visits to Italian restaurants.  We stopped by Ristorante La Piazzetta, which is on Filderbahnstrasse and just around the corner from Il Cappuccino Feinkost.

One very hard working guy was handling all the tables outside.  I heard the voices of our American countrymen and noticed that the place was humming with business.  It also smelled like a good place to eat.  We sat down and the waiter took our order after a few minutes.  We each had a glass of Chianti and some San Pellegrino.

Maybe after 45 minutes, a woman who was obviously a member of the wait staff showed up.  She helped her colleague, who was handling the crowd admirably.  The couple sitting near us were obviously regulars and the new waitress stopped and chatted affectionately with them for awhile. 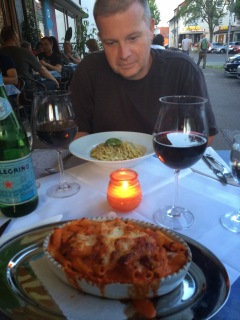 Dinner…  I had a very satisfying oven baked rigatoni with meat sauce and cheese.  Bill had fettuccine with basil pesto.  His dish was vegetarian and very refreshing.  The basil had sort of a cooling effect on the dish.  My dish was very much comfort food, which was what I was going for last night.  I only managed about half of it, though.  I think both of these went for about about 7 euros. 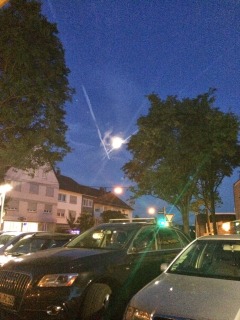 And there it is, competing with the streetlights.  Last night’s moon was gorgeous.  I got a better shot with my digital camera. 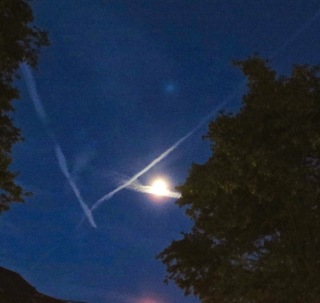 We ended the evening with glasses of Montepulciano.  The check was about 33 euros.  I noticed a couple of cute little girls sitting near us, well-behaved and enjoying the food.  I think there are plenty of good menu options for kids.

Like most European restaurants, smoking is allowed at the outside tables and a few people were taking full advantage.  If you are sensitive to smoke, it may be advisable to eat inside.  I noticed a lot of people doing that, too.

We noticed one car was parked crookedly in the lot next to the restaurant and I told Bill I bet that was the work of the Americans who were sitting in the corner.  Sure enough, I was right!