The leaves are turning in Jettingen…  I took the boys for their walk yesterday and we enjoyed perfect weather. 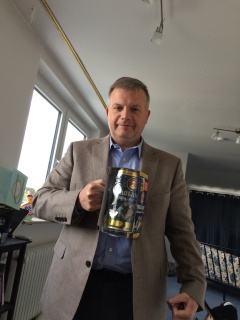 Bill came home with a mas krug of Paulaner, perfect for Reunification Day…

Last night, Bill and I decided to go to Tommi’s Bistro for dinner.  As usual, it was a pretty quiet Friday for them, although today they will be busy.  The waitress was telling us that she’s going to have to be there until the wee hours of tomorrow morning, breaking down after their Rocktoberfest show going on tomorrow night.

Tonight, there will be live music starting at 9:00pm.  There is a fifteen euro cover charge and the event will include most of the same guys who play for their jam session.  Or, at least that’s what our favorite Tommi’s waitress told us.  The music will be 70s and 80s era rock, which I love. 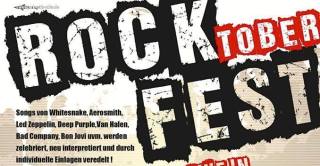 As for last night, we basically had our usual except Bill had a filet instead of the entrecôte.

Fries… we really should have just ordered one of these.

Lots of water, wine, and sherry to wash all of this down…  As usual, it was delicious!  We spent about two hours at Tommi’s chatting.  We may go back tonight, because I’m pretty sure the music will be very good.  I wish it started a little earlier than 9:00, though.  We’ll see how we feel as the day wears on.  Bill came down with a bug this week and I’m hoping he doesn’t pass it to me.  If we go tonight and eat, I may try something besides beef.  Don’t want to eat steak two nights in a row.

On Thursday of this week, Tommi’s will have their monthly jam session, which is where a band plays and others are welcome to join them.  I have done it a couple of times and it’s always a blast!  The jam session doesn’t require a cover charge, but tips are appreciated.

I also learned that from October 16th through the 18th, Tommi’s will have pulled pork available.  It will be served with “American” style cole slaw.  I am not a fan of slaw, but I know some like it on their pork.  We may have to try that, too.

Aside from stuff going on at Tommi’s, I have kind of a big week ahead of me.  Monday, I go back to the dentist to get a cleaning and make some impressions for my implant.  I guess we’ll also plan the next part of the process, which will likely be sinus lift surgery.  I am dreading that.

Then on Wednesday, we plan to go to Stuttgart to see Diana Krall.  This was sort of a last minute thing.  A local friend of mine has tickets and is unable to go to the show.  It’s time for him to pack his house and leave Germany after many assignments here.  So we’re going to take the tickets off his hands and check out Diana Krall.  I actually like her music very much.  I especially enjoy singing it.  We should have a good time.

Maybe later today, we’ll do something fun and I can update again.  For now, enjoy the holiday!