Bill and I had planned to go to Rocktoberfest last night, but we got to Tommi’s about forty minutes too early– they weren’t opening until 8:00.  We did know this, but weren’t sure if that meant they weren’t doing their usual dinner service.  Since we wanted to have dinner, we decided to go somewhere else and maybe kill some time before Tommi’s was ready to receive us.

So we went two doors down to Zum Schiff and had dinner.  We ordered a round of beer and listened to Bruce Springsteen over the sound system, which I thought was pretty cool.  It wasn’t very loud, though, so once a few more people showed up, I couldn’t hear the music anymore.

I didn’t take any pictures because I had the same thing last night that I did the first time we visited.  Bill had something different.  I think it was sauerbraten with red cabbage and a big dumpling.  Both dishes came with salads and bread.

I wasn’t as happy with the bread this time, because instead of butter, they served it with some kind of quark spread.  The one I tried had chives, but tasted a little musty, like bleu cheese.  Bill caught the look on my face and laughed as I carefully removed the bread from my mouth.  I have a hard time with cheese.  It has to be very mild and melted.  Bill tried the spread and liked it.  They had another spread that he said was Italian flavored, with basil, tomato, and other spices.  I didn’t try it, though, because I seriously will gag if I’m not careful with very strongly flavored foods.

Anyway, we were enjoying our meal and several other folks showed up.  We were the only non Germans in the place and Bill remarked that he thought the proprietor must be local because it sounded like she was speaking the local dialect.  I couldn’t help but notice that a lot of the people who came seemed to know her well and she gave most of them warm hugs.  I take that as a good sign.

Another couple came in and sat at a corner table.  No one had turned on the light.  They were there a few minutes before another woman working noticed them and alerted the proprietor, who said “Oh hallo!”  She turned on the light for them and they laughed.

I commented to Bill about how I’ve come to enjoy German food.  Then, realizing how many gasthauses there are here, I said “I guess I’d better like it, huh?”

About halfway through dinner, a guy sitting at the table two down from us held up the wine bottle peppermill that we noticed the last time we visited.  He said in English, “German humor!  It’s a peppermill!”

I remarked that we noticed that the first time we visited.  Pretty soon, we realized that most everyone dining at the same time we were spoke very good English.  The lone exception was the proprietor, who, if she spoke English, did not let on.  I enjoyed the mood in the restaurant, though, because it almost felt like we were mingling among friends, even though I didn’t actually meet anyone.  Everyone was very friendly and convivial and it wasn’t nearly as loud as I was sure Tommi’s was.

Finally, the folks that showed us the wine bottle peppermill got up to leave and the male half said, “Enjoy your holiday!”

I laughed and said, “We live here.  It’s a two year holiday!”

Another round of laughter.  Jettingen is sure a fun town.

It was about 9:30 when we left Zum Schiff, so we decided to go home instead of hanging out at Tommi’s.  I doubt anyone missed us. 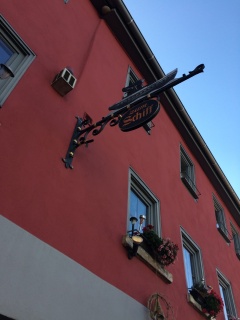 These were taken the first time we visited about a month ago.