Happy birthday to the US Army!

Last night, Bill and I ventured to Sindelfingen to attend the 241st Army Birthday Ball.  We hadn’t originally planned on attending the event, but got talked into it by a certain low ranking MP.  😉  Since the Army’s birthday is close to my birthday, we figured it would be a fun way to celebrate with friends and fellow party animals.

The last time Bill and I attended an Army Birthday Ball was in 2004.  We lived at Fort Belvoir at the time, so our nearest ball was a fancy one held at a hotel in Washington, DC.  I remember sitting at a large table surrounded by polite but somewhat unfriendly people I didn’t know.  I drank way too much wine that night and ended up spewing in my husband’s car as we drove through old town Alexandria.  My husband later gifted that car to his former stepson, who turned out to be using Bill for money.  But that’s a story for another blog post.  😉

I drank too much wine last night, too, but fortunately no one got hurt and no messes were made!  We only made great memories and a few new friends!  Not for nothing, but I think I prefer the smaller, more intimate Army ball here in Germany than the huge fancy one in DC with big name entertainment.  I’d rather be entertained by fellow revelers.

Bill parked the car at Panzer and we walked across the pedestrian bridge to catch the bus that would take us to the event.  We didn’t really know where we were supposed to be going, but soon spotted several other people dressed like we were.  We got on the bus and I was immediately delighted by the somewhat anatomically correct sticker on the window… 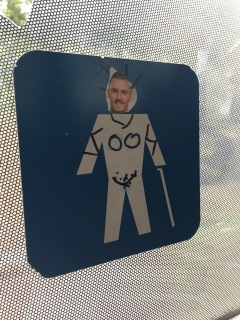 Whose head is on this little guy?

I had been a little bit concerned about my attire.  I ordered a long dress for the ball and it got to me in time, but decided not to wear it because it’s a little too long for me.  It’s also made of fabric that I thought would be too heavy for a June night in a venue with no air conditioning.  It wasn’t actually that hot last night, but I was pretty grateful that I dispensed with the long dress and fancy heels.  I am not very physically coordinated under the best of circumstances.  Add in heels and booze and I can be a menace to other people in proximity to me.  We had to climb up and down a number of stairs.  The last thing I needed to do was trip over a long gown while struggling in uncomfortable shoes.  Maybe I’ll save the long dress for the Marine ball in November, after I get it hemmed.

There really was no need to worry about how I was dressed, though.  Plenty of ladies wore short dresses.  Some wore very high heels and platforms, and some wore flats.  I saw a few people take off their shoes altogether.  One of my lady friends even wore stylish pants and rocked them!  Besides, I really just wanted to see Bill in his blues… 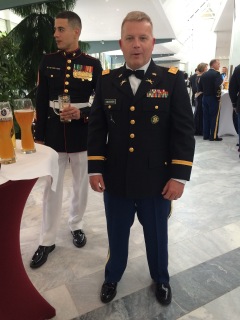 I must admit, I miss seeing Bill in his uniform on a daily basis.

Proud to say he still cleans up fine in his blues!  Be still my heart!  My Marine friend, Paul, is looking sharp, too!

Bill waits in line at the cash bar.  Not long after I took this photo, a bugle sounded to signal that it was time to get the party started.

When we booked our table for four, it was empty.  We weren’t sure if there would be another couple joining us.  We did end up having company and they turned out to be a lot of fun, even if they had to cut out early because the male half had to go on duty.  The Army never sleeps!  I’m sure Bill will eventually run into our new acquaintance, since it turns out they work in the same area.  On the way home, I was thinking about how lucky we were to have such friendly and engaging people sitting at our table with us.  Unfortunately, that’s not always a given!  Not only were they friendly and interesting, but they were also funny.  I truly enjoyed meeting them. 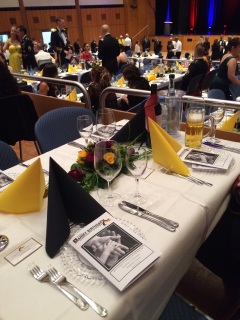 The shindig started off with the usual protocol.  There was a call to mess, an invocation, and several ceremonial toasts.  I was immediately reminded of the first episode of Army Wives, when the characters were toasting the president and one of the characters thought the president was actually attending.  I didn’t see anyone make that mistake last night.

It wouldn’t be one of my travel blog posts if I didn’t write about the food.  If I recall correctly, we had four choices for dinner, which we chose when we bought our tickets.  There was beef, chicken, salmon, and the vegetarian option.

We had salad and some surprisingly good bread.

I had salmon with rice and a cream sauce.  It was pretty good, though not very hot by the time it got to our table.  That’s understandable, though.  The other couple also had salmon.

Bill went with the beef… also smothered in cream sauce.  Also, not bad at all for banquet food.

After dinner, the birthday cake was cut…

I’m sorry this is a crappy picture.  I used a different purse last night and neglected to pack my digital camera that would have allowed me to zoom in.  I did think it was funny that the young soldier helping to cut the cake was born in 1994.  That was the year I graduated college.  I feel old, now.

The cake was delicious!

The colors were retired… and people commenced dancing.

I stayed safely on the tier overlooking the festivities.  I won’t dance, so don’t ask me.

At one point, the other couple at our table asked one of the waiters if we could have more wine.  They said we had to pay for it.  But then as the evening wore on, one of the waiters brought us a fairly full bottle that needed to be finished.  Waste not, want not!  We also witnessed a marriage proposal, which was definitely cool, and we got to take home crystal plates as a memento.  I was actually delighted about that, since a few of our small lunch plates got broken during our move!  Those crystal plates will definitely get used.  So will the pretty centerpiece as I celebrate birthday #44 tomorrow.

I was a little confused about the music.  There was a D.J. playing dance music, but then it seemed to morph into karaoke for a few numbers.  I actually would have enjoyed a karaoke party, since karaoke is one of my favorite pastimes.  I sing much better than I dance.  But I think they were only doing karaoke for a few pre-selected slow numbers.  The few singers were good, which is always a blessing at any party.  When the dance music came back on, a huge conga line formed.  I watched the conga line and briefly thought about joining it… but decided I’d rather watch.  I didn’t want to press my luck and faceplant or something.  Okay, I will admit that I did dance for about thirty seconds…  I didn’t fall down and didn’t throw up on the dance floor, so I call that a success!

As I was enjoying the festivities last night, it occurred to me how much I enjoy attending Army events.  There’s always a lot to see and it’s fun watching people have a good time.  There’s never a shortage of good people at Army balls.  People really let their hair down… well, as much as they can let their hair down, anyway.  I was even introduced to several new line dances (that I didn’t attempt myself), including one for “Copperhead Road” by Steve Earle.  I happen to have family roots in the Shenandoah Valley of Virginia, so that song has a special meaning for me.  😉  There’s usually moonshine at my family’s parties, as well as dancing and live music.

The best part of the evening was getting to meet several people I only know from online.  I am very active on Facebook, so I’ve interacted with a lot of folks in the Stuttgart community via the Internet.  Several of them came up to me last night and asked, “Are you the ‘Overeducated Housewife’?”  That was too cool!  I also got to feel like a celebrity as I talked to several people I’ve never “met” online who read this blog and told me they enjoy it.  To those who do read, I want to offer my sincere thanks!  It really made my night last night to hear people tell me they like the blog.  I was even happier to hear that a few folks had tried and enjoyed some of the restaurants I’ve written about.

I write this blog mainly because it’s fun and gives me something constructive to do.  I don’t do it for fame or money, though that would certainly be an incentive to write more.  So, it’s really a treat when people tell me what I do is useful to them.  Being “overeducated”, childless, and unemployed sometimes makes me feel a little worthless.  Last night, I was reminded that every person has worth and one can never know how many people whose lives they touch every day.  Thanks to everyone who touched my life last night by making the evening so much fun.  And I want to offer a sincere thanks to everyone who reads my blogs.  I really do appreciate it.

Happy birthday, Army!  We really had a marvelous time celebrating with everyone last night!