Our train ride back to Dublin was mostly uneventful when compared to the ride to Kilkenny.  We did sit near a woman who appeared to be rather suspicious.  At one point, she sprayed deodorant on her underarms in front of everyone.  She got on the phone a lot and rode with a guy who was telling her about his living situation while also complaining about how much a pair of shorts cost him.  I had a weird feeling that she may have been a lady of the evening, but I can’t be sure of that.

There was a group of ladies who were clearly going out on the town.  They were drinking beer and talking very loudly about their evening plans.  Another lady sat with a group and proceeded to have what sounded like a live Dr. Phil session.  She talked a lot about all she’s done for people and how no one appreciates her.  She even mentioned working with people in prisons and how she went unacknowledged for her work.  I was pretty glad to get back to Dublin and into a cab so we could hit the sack, pronto.

On Sunday, we had big plans to visit the Guinness Storehouse.  I had booked us tickets for the 4:00pm Connoisseur Experience, which involves having a private tasting of several Guinness products.  You pay a bit extra for this experience, but I had read it was well worth the euros.  Also, Bill and I are dedicated beer lovers who enjoy beer tourism, so it was natural that we’d splurge.

After breakfast, I did some writing, then Bill and I thought we might go have tea somewhere.  Unfortunately, although there are places that offer tea in Dublin, they mostly seemed to be booked.  Bill asked someone at the hotel for a recommendation for a place.  We were told we should go to a little place called The Queen of Tarts.  We started walking and ended up in Dublin’s shopping district, which was teeming with people. 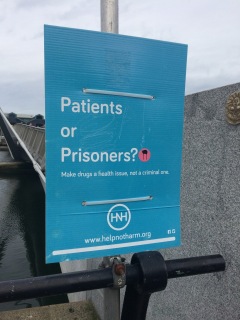 I spotted this sign on the way downtown.  I thought it was interesting.

It was posted right next to this plaque…

Unlike Germany, Ireland allows shopping on Sundays.  Consequently, the whole area was a madhouse.  I don’t generally enjoy being in huge crowds of people, especially when I don’t necessarily know where I’m going.  I did take notice of a couple of really good buskers who were playing music by the stores.  But as we continued to walk, I started feeling cranky and hungry.  We finally ended up at a bar called The Banker’s Lounge.  It had a TripAdvisor seal of approval on it, so I figured we would at least enjoy a pleasant dining experience.  I was half right.

Utility box of some sort painted like a candy machine. 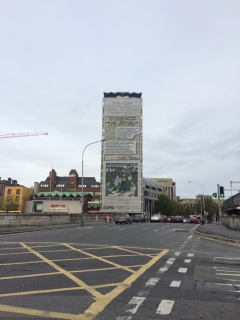 We walked into the restaurant and were directed to a tiny, low table with two little stools.  I have very short legs, so this wasn’t a huge deal for me.  The restaurant itself was rather crowded and, curiously, most of the people sitting in there were speaking Spanish.  Although the bar was typically Irish, the staff definitely weren’t.  But since I really needed some protein, I ordered fish n’ chips and Bill had Irish stew. 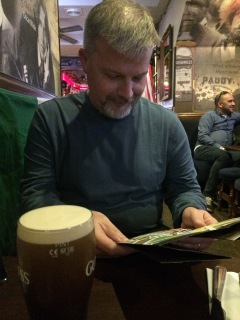 Bill checks out the menu.

My fish n’ chips.  The peas were supposed to be mushy, but weren’t.

Bill liked his Irish stew.  It was made with lamb, though, so I didn’t care for it.

My mood was slightly improved once we’d eaten.  But then I looked up and realized I was having a little crack with my lunch.  This dude was apparently oblivious and I think I had the best view in the house…

Say no to crack.

Anyway… I don’t think I’d eat there again, although it certainly wasn’t my worst experience in a restaurant.

We kept walking toward the Guinness Storehouse and I took some pictures along the way.  Not long after our crack filled lunch experience, we saw The Queen of Tarts.  If we’d only walked a few more minutes, I could have been spared the accidental mooning. 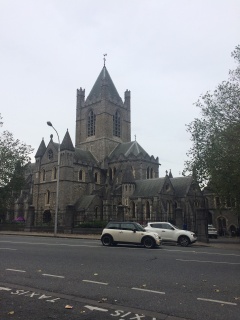 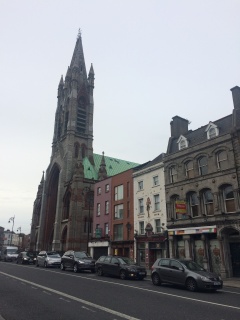 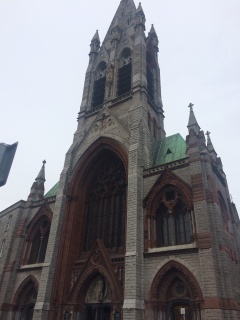 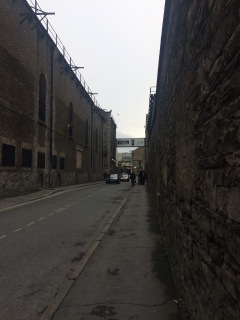 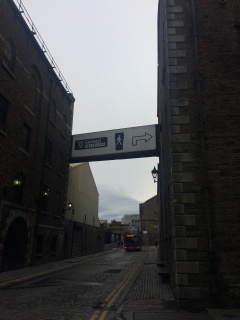 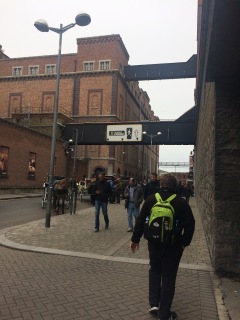 As we approached the massive Guinness Storehouse, I took note of the horses and buggies, as well as  the many taxis waiting for people coming out of the museum.  Trust me… you are liable to be exhausted after you tour the Storehouse.  It’s HUGE.  We had been advised to see the museum before the beer tasting experience, so we started our tour at about 2:00pm.  Having been to a lot of brewery and whisky distillery tours, I already know pretty well how beer is made.  Consequently, we moved through the exhibits on the first floors rather quickly.  I probably would have done that anyway, since the place was so crowded and overwhelming with people.  But then we got to the advertising section, which I found pretty cool… 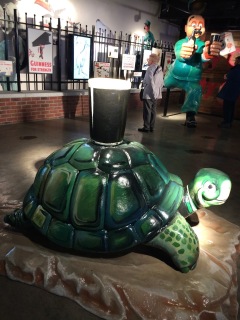 The Whistling Oyster.  It was whistling when I took this photo.

The Storehouse has a couple of restaurants.  One of them featured some live musicians playing in a corner.  The other one appeared to be slightly more upscale.  Since Bill and I had already eaten, we headed up to the Gravity Bar, which was where we got our free pints. 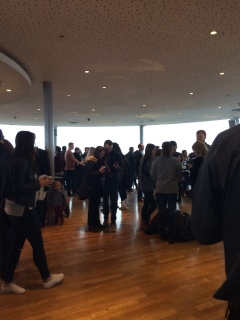 Check out the crowds!

These guys were crowded around a guy dressed up like a bottle of beer.  At first I thought maybe he worked there, but then I saw him take off his costume.  Maybe it was just a bunch of lads out on the town. 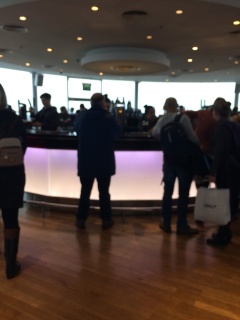 Bill finally managed to get a pint.

And I snagged this photo of the view.  It’s actually panoramic, but there were way too many people to get more photos.

We went to the somewhat quieter fifth floor to enjoy our suds.

At about 4:00, we waited in a bar for our fellow connoisseurs.  A friendly guy named Ian took us to a hidden bar, where we spent the next hour learning about Guinness. 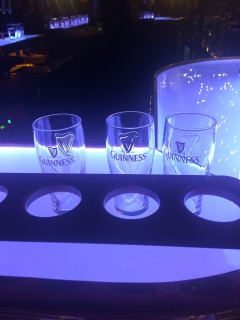 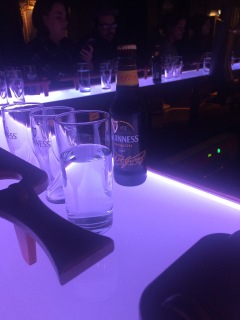 The Connoisseur Experience was very interesting.  I learned, for example, that the term “P’s and Q’s” came from pints and quarters, which were the measures of beer back in the day.  Our guide was basically great, except he seemed to forget there were a few of us sitting on the other side of the room.  But what he had to say was very informative and he was otherwise an excellent speaker.

And yes, we got to pour our own pints of Guinness, too.

As we walked out of the Guinness Storehouse, we stopped to pick up engraved glasses that I’d ordered in honor of our anniversary.  On the way through the line, we picked up a few souvenirs.  You can really go crazy at the Guinness store.  I recommend proceeding with caution!

After we left the Storehouse, we found a cab and another entertaining cabbie.  More on that in the next part.