Another lunch at Luz Bistro and a trip to Media Markt…

Our microwave gave up the ghost a few days ago.  We have no idea how old it is; we bought it from the people who lived in our house before us.  It was a basic model though, probably readily accessible at AAFES.  I use the microwave a lot during the week when I heat up leftovers for lunch, so it was a real bummer that the thing died on us.

Fortunately, we recently discovered that the nearby town of Nagold has a Media Markt.  Media Markt is basically like a European version of Best Buy.  Rather than trying to fix our used microwave, we decided to buy a new one.  An added bonus is that Nagold is one of our favorite little towns and boasts some nice restaurants, including Luz Bistro at the Alte Post.

I have blogged about Luz Bistro several times.  We’ve been there probably half a dozen times and we’ve never been disappointed with the food or the service.  I also like it because it’s rarely crowded, probably because the food isn’t cheap.  Although Luz Bistro doesn’t offer cheap eats, I have never felt we paid more than we should have.

Nagold was busy today because the market was going on.  I was a little sorry we didn’t make time to pick up some fresh goodies.  Maybe next weekend we’ll go.

We arrived at Luz at a little bit past noon.  A very charming and delightful waitress greeted us and invited us to sit where we wanted.  We selected a two top near the window, which seems to be where we always end up sitting when we’re not outside on the terrace.  When the waitress discovered we were English speakers, she offered us menus in English.  We told her German menus were fine.  The truth is, I probably ought to take the English menus more often!  However, I did manage to pick a great lunch today, despite having to clarify that I was ordering fish and not something I wouldn’t like. 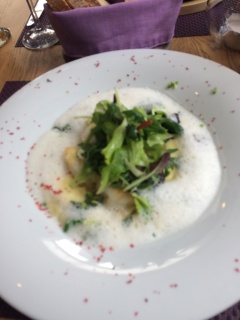 My lunch was delicious!  It was skrei, which is a lovely mild white fish from Norway.  It reminds me a bit of turbot or flounder.  The chef paired it with sinfully buttery mashed potatoes, foam, and topped with greens and scallions.  I really enjoyed it, although I had to cry uncle on the mashed potatoes.  They were so good, but a bit rich. 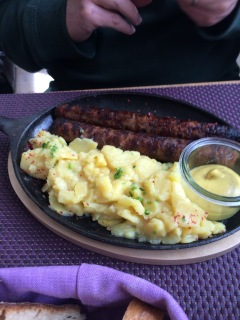 Bill went with bratwurst and potato salad, accompanied by mustard.  He liked his lunch, too.  He said it reminded him of the wurst he enjoyed in Bavaria during his first Germany tour in the 1980s (before my time, obviously).  He couldn’t finish the potato salad. 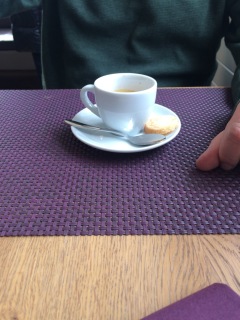 For dessert, Bill had espresso.

I had “a bowl full of chocolate”.  Seriously, that’s what it was called in the menu.  It was basically very cold chocolate mousse and whipped cream served in what looked like a mixing bowl.  The whipped cream dollops had little madeleines on them.  The dessert was very light, which I appreciated.

After we finished lunch, we made reservations to eat at the Alte Post’s formal restaurant for next weekend.  As nice as Luz Bistro is, the Alte Post also has a more formal eatery which offers up to seven courses.  I look forward to returning and reporting after we try it.  It will be our first time.

Then, after we made reservations for next week’s Saturday dinner, we went to the Bauhaus/Media Markt in Nagold.  We lived here for over a year before we knew it existed!  But this shopping area actually has a lot of stores, including an Aldi, Deichmann’s, and a Kaufland, as well as a McDonald’s.

After searching briefly, we found the microwaves and ended up coming home with one that is a combination convection oven and grill.  I’m hoping I like it.  It’s bound to be a step up from our basic microwave that just bit the dust.  Bill is also going to try out his new toy, the Anova Precision Cooker.  I got it for him for Christmas, but it only just arrived.  And tomorrow, he will be brewing beer for the first time since we left Texas.  Should be a happy time!

This place was a madhouse today!