The weather on May 3rd, 2018 was looking kind of cold and dismal.  It was chilly enough in Germany, and it appeared that we might have some bad weather in France, too.  In fact, The Weather Channel was even predicting avalanches for the Annecy area.  Because I wasn’t sure what to expect, I packed clothes for every occasion.  I ended up bringing more than I really needed to, especially since after the first night, we had absolutely glorious weather.

A couple of weeks ago, Bill and I got stuck in a horrendous traffic jam on A81 when we decided to go to the ADAC office at Breuningerland in Sindelfingen to pick up a couple of Swiss vignettes.  For those who don’t know, here’s a brief explanation.  If you drive through Switzerland, you need a “vignette”, which is basically a sticker that proves you paid the yearly toll.  It costs 40 Swiss Francs or 35,75 euros.  The 2018 vignette is valid from December 1, 2017 until January 31st, 2019.  The stickers are available at the border, or you can order them and have them sent in the mail.  Most of the time, it’s very easy to just go to the mall and get them, although we may think twice about that next year!

Anyway, after Bill took the dogs to Max’s and put the sticker on my Mini Cooper convertible, we were ready to go.  The Mini Cooper is another reason why I wanted to leave the dogs in Germany.  Annecy is the kind of place that just begs for a convertible.  My car doesn’t get driven enough and it’s super fun to take it on the Autobahn, even if my husband’s RAV 4 is somewhat more comfortable and roomy.  When I saw the clouds in the sky on Thursday morning, I was afraid the trip might be wasted in my little car.  Luckily, as you’ll see as this series progresses, we had perfect convertible weather.

I guess these things had to come from somewhere.

Our trip south started off relatively uneventfully.  We headed down A81, passed the big phallic looking tower near Rottweil, and crossed into Switzerland.  I always get a kick out of the area near the border, since there’s a big Wunderbaum factory there.  Wunderbaum is the company that makes those “trees” you hang in your car to make it smell “fresh”.  Other than that, the Swiss/German border is a pretty boring place.  Actually, I was hoping for a beautiful drive like we had last year when we drove through Switzerland to get to Italy.  Unfortunately, the GPS sent us a different way.  Apparently, the main highway was closed for some reason.  Consequently, we went through some truly ugly parts of Switzerland… very industrial and not at all picturesque.

As the morning continued, I started getting hungry.  Bill agreed it was time for lunch.  He went into a town and then, inexplicably, decided that it wasn’t a suitable place to find food.  Time went on… I got hungrier.  Then I had to pee.  For some reason, Bill kept driving.  He was hoping to find a nice local restaurant, rather than a fast food place or highway restaurant.  Usually, when we travel with the dogs, we end up eating fast food.  Since we didn’t have them with us this time, he wanted to avoid that.  Good plan.  Except I get super bitchy when I’m hungry and have to pee.

Finally, as we got closer to Bern, I told Bill I didn’t care where he stopped, but I really needed to whiz.  At that point, I’d been holding it for a couple of hours.  It was also getting pretty late for lunch. Just as restaurants in Germany close for “pauses” between lunch and dinner, so do they in Switzerland and France.  It was about 1:30pm when he finally started searching for a place.  We passed an Italian restaurant that had parking out front and was curiously co-located with an Indian restaurant that also sold saris.  I kind of demanded that Bill stop there.  Drei Könige to the rescue!

Bill, being the sport he is, took the liberty of ordering a half carafe of house red while I took care of business.  Then, he took his turn.

See that look on Bill’s face?  I wasn’t the only one who needed to pee.

There was only one other guy in the restaurant when we visited and he was finishing up.  We had the waitress’s undivided attention as we decided on pasta dishes. 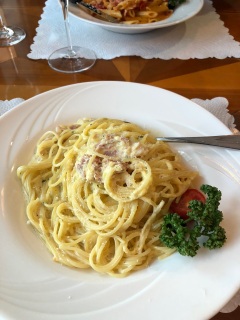 I had Spaghetti Carbonara, a dish I’d never had before I started dating Bill.  It’s pretty rich, since it’s made with egg, cream, and bacon.  The waitress brought me a huge serving, too.  It looked like they’d dumped a whole box of spaghetti into the pot.  I didn’t come close to finishing this and we couldn’t take it with us.  I will admit that it hit the spot, almost as well as the surprisingly good house red was. I don’t know what the house red was, but it was excellent.

Bill had spicy penne pasta that came in a more manageable size.  I liked his dish, with its sassy little peppery kick.

This was in both the men’s and ladies’ rooms.  It’s basically a natural aid for guys with large prostates.  I don’t know why this was in the ladies room, but I couldn’t resist sharing it.  I love this kind of stuff.

Switzerland is expensive.  This simple lunch set us back about 88 Swiss francs– that’s roughly akin to the same amount in US dollars.  However, the waitress was very kind to us and even mistook us for Germans.  I was surprised about that, since although we were speaking German, it was pretty terrible German.  She seemed genuinely surprised that Americans were dining in her restaurant.  She asked if I wanted to take the rest of the pasta, but it wasn’t feasible.  She agreed that it was a very large portion of pasta, even for a “truck” like me.  (“Truck” is a nickname a chef at a restaurant where I once waited tables gave me because I could carry up to nine entrees at a time.)

I snapped this photo as we were leaving…  just in time for them to take their “pause”.  Yes, I would eat there again.  The food was good, even if it was a bit too much in terms of quantity and price. 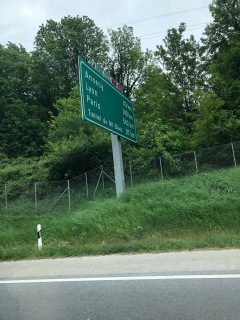 I was a little slow on the draw, but you can see we were nowhere near Paris. 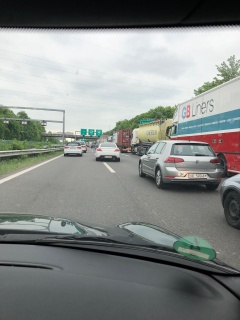 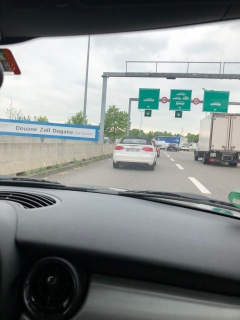 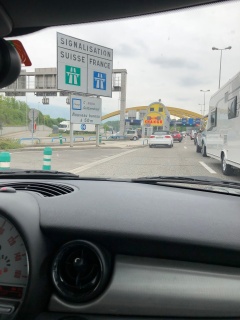 This was a bummer…

But I got a kick out of the change kiosk.  They don’t have one of these fancy ones at the German border. 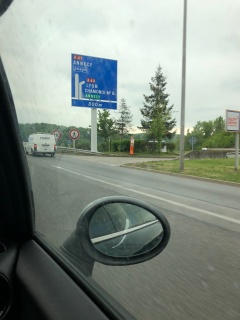 Okay… so here’s about where Bill started getting really antsy for Annecy.  There was a lot of traffic.  We had to pay about 7 euros in tolls and Bill didn’t get close enough to the machine to collect his change.  Then, we were in one of many confusing traffic circles.  Some guy honked at Bill when he was trying to figure out which exit to take, causing him to take the wrong one.  He started cussing and I told him to chill out.  And then, blessedly, we got on the right road to Annecy, although it was not the most direct route.  I started to see why so many people fall in love with this area.  The scenery is just stunning.

Suddenly, I saw misty mountains by the crystal clear lake…

I snapped pictures while Bill pissed off all the people behind him, including one woman who was very animatedly showing how exasperated she was. 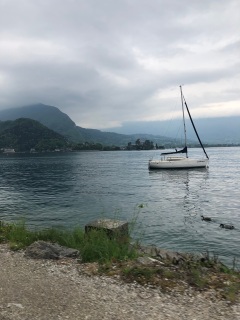 But I’m glad Bill slowed down so I could get a few shots.  This was our only totally cloudy day.  We only had a few clouds on Friday.

Talloires is a world away from Annecy, which is a true city in every sense of the word.  There are several hotels in this area, as well as a large campground and a place that appeared to rent “tiny” houses by the lake.  We didn’t take the time to explore the camping or tiny house options, but I wanted to mention it for those who are into that kind of thing.  Here’s a Web site for one place we noticed last night.

We pulled into the parking lot at Hotel Les Grillons at about 5:00pm… just in time to freshen up for dinner.