Fancy in Annecy… part one

Some time ago, when I was messing around on my computer, I read an article about beautiful European cities that often go unnoticed.  I don’t remember any of the cities on that list now, except for one…  Annecy, France.  This gorgeous city is in southeastern France, next to crystalline Lake Annecy, in the Haute-Savoie Department in the Auvergne-Rhône-Alpes region.  Annecy is not far at all from either the Italian or Swiss borders; Geneva is only about 20 miles or so north.  And yet, until I read about Annecy in a random travel article, I had never heard of the place.

Just one of the romantic scenes in Annecy…

For months, I tried to finagle a visit down there.  I knew we’d need an extra long weekend.  I thought we might need to bring our dogs with us, since our pet sitter is routinely booked solid when the weather gets nice.  I kept searching for pet friendly accommodations that would be suitable for us, but came up empty-handed.  Finally, Bill suggested that we take a short trip from May 3rd until May 7th.  Okay… originally, he only wanted to do three nights.  Then I reminded him of how long it takes to drive through Switzerland, which we would have to do to get to Annecy.  And I showed him some pictures of the city, which is very beautiful.  He asked for four nights and got them.  Fortunately, Max, the dog sitter, was able to take Zane and Arran.

Next, I went searching for a hotel.  Initially, I was very excited about booking a hotel instead of a pet friendly apartment or vacation home.  Once again, as I searched for suitable lodging, I kept running into issues that were dealbreakers.  Finally, thanks to Booking.com’s helpful location suggestions, I found us an unforgettable hotel called Hotel Les Grillons in the small hamlet of Talloires, which is about a twenty minute drive from Annecy.  Having now been to Annecy, I have to say that I am very glad I didn’t book a hotel in the city itself.  I’ll explain more about that later. 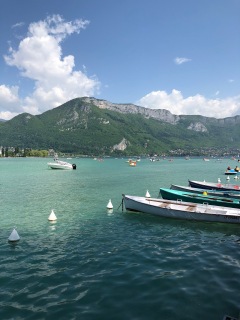 Yes, you can go boating… or parasailing… or just simply dream by the lakeside.

Suffice to say that we had four great nights at Hotel Les Grillons, a three star property next to the lake and boasting a beautiful pool area.  What really makes this hotel awesome, though, is the FOOD!  If you’re in my food and wine Facebook group, you may have already seen some of the pictures.  I was able to book half board, which included dinner every night.  Although we opted not to eat dinner at the hotel on the fourth night, we did enjoy three delicious multi-course meals.  A buffet breakfast was also included.  More on that, too, in a later post.

As usual, I’ll be breaking up my stories about this journey into several parts, so if this first post intrigues you, please be sure to follow along.  I took a lot of absolutely gorgeous pictures on this trip, which wasn’t hard to do.  Annecy and the surrounding area is just plain beautiful.

First thing’s first, though.  I had to learn how to pronounce “Annecy”.  Don’t make the mistake I made by called it “Ann-eh-cee”.  It’s two syllables and rhymes with “fancy” or “Nancy” (which is also a beautiful French city!).

There are videos out there, mostly made by Americans, pronouncing Annecy as if it has three syllables; but every French pronunciation I’ve heard, including within the actual city, sounds like the guy in this video.

Now that the introductions are out of the way, I shall commence to blogging.  I took the whole weekend off just so I could enjoy France properly.  Now that I’m home again, I’m ready to dish!