The coolest hardware store ever…

Last night, as we were sitting outside in our fenced in yard, it occurred to me that I’d really like to get rid of our old patio furniture… or, if not get rid of it, repurpose it.  We have two large balconies in our latest house, neither of which have any seating.  I have been eyeing teak patio furniture for weeks.  Finally, I talked Bill into a trip to the MS Holz Fachmarkt.  I wrote about this store a couple of months ago, noting that it has a super awesome slide for kids and big kids.  Today, we actually saw kids sliding down as well as at least one adult.  No, I didn’t try it myself, although I was slightly tempted.

This thing is a barrel of laughs.

It took us no time at all to find the table and chairs we wanted.  It took a bit longer to find someone willing to help us.  As I’ve mentioned before, customer service can be a bit sketchy in Germany sometimes.  Anyway, we did manage to flag down a tall young man who spoke some English.  The table and chairs we wanted were in stock, and by plum, we were able to fit them in our SUV.

Lots to choose from.  They also had some very impressive grills for sale.

They had a bunch of different tables and chairs, some a lot more expensive than what we bought.  I love that Germans don’t go in for that shitty particle board crap that is so easily found in the United States.  The furniture in this store was all wood and well made.  And since our porch is covered, it’s no problem keeping it out of the elements.  This set, we’ll probably store in the garage during winter.

The back of our SUV was pretty well packed, but if we couldn’t have gotten it home, we could arrange for delivery.  This store is really close to where we live, so it wouldn’t have been too expensive to arrange delivery.

A big improvement!  And since we have beautiful weather, I suspect we’ll be breaking it in today.  I will look for some cushions.

After we set up the furniture, we went to Wiesbaden for lunch.  After we walked around for awhile, searching for a place that wasn’t too crowded and wasn’t taking a pause, we ended up at Hiro Sushi.  Our waitress was really friendly and they were playing surprisingly soothing guitar Muzak.  I must be getting old, because for once Muzak didn’t really annoy me.

Wiesbaden is so pretty.

They had Paulaner alcohol free beer at Hiro Sushi.  It was surprisingly good.  I couldn’t really tell that it was alcohol free. 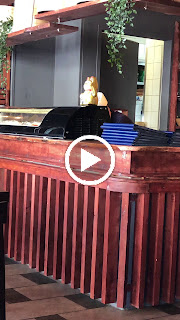 They had a little cat that waved…

Interesting art on the walls that welcomed everyone in several different languages.

I was starving, so I ordered shrimp tempura spring rolls.  These were surprisingly good, though a little hard to eat.  Basically, they each consisted of a fried shrimp surrounded by sprouts and cabbage and wrapped in rice paper.

I’m not quite sure what Bill had.  It was very crispy and had avocado, but it wasn’t quite as fancy as mine was.

I had the Morido, sushi with tempura fried avocado and covered with salmon.

We usually don’t bother with dessert in sushi places, but today I had green tea ice cream with mangoes.  It was very refreshing.

Bill went with deep fried Vietnamese sesame balls with coconut sauce.  He said they were a little heavy, particularly for the weather.  I was glad he tried them, though.  I was curious.

This was a very nice lunch.  I felt a lot better afterwards, especially since I was really hungry when we came in.  The total bill came to about 51 euros.  After we paid it, and Bill thanked the waitress in Japanese, we headed back to the car and dropped off some empty bottles, then picked up more beer.  I have a feeling it’s time to enjoy our new outdoor furniture before Easter.  Tomorrow, we may head to Frankfurt for their annual spring fair, the Dippemess.  We’ll see if either of us feels like the train ride…

We use cookies on our website to give you the most relevant experience by remembering your preferences and repeat visits. By clicking “Accept”, you consent to the use of ALL the cookies.
Do not sell my personal information.
Cookie SettingsAccept
Manage consent

This website uses cookies to improve your experience while you navigate through the website. Out of these, the cookies that are categorized as necessary are stored on your browser as they are essential for the working of basic functionalities of the website. We also use third-party cookies that help us analyze and understand how you use this website. These cookies will be stored in your browser only with your consent. You also have the option to opt-out of these cookies. But opting out of some of these cookies may affect your browsing experience.
Necessary Always Enabled
Necessary cookies are absolutely essential for the website to function properly. These cookies ensure basic functionalities and security features of the website, anonymously.
Functional
Functional cookies help to perform certain functionalities like sharing the content of the website on social media platforms, collect feedbacks, and other third-party features.
Performance
Performance cookies are used to understand and analyze the key performance indexes of the website which helps in delivering a better user experience for the visitors.
Analytics
Analytical cookies are used to understand how visitors interact with the website. These cookies help provide information on metrics the number of visitors, bounce rate, traffic source, etc.
Advertisement
Advertisement cookies are used to provide visitors with relevant ads and marketing campaigns. These cookies track visitors across websites and collect information to provide customized ads.
Others
Other uncategorized cookies are those that are being analyzed and have not been classified into a category as yet.
SAVE & ACCEPT