Our first trip to Daily Burger…

About a month ago, Bill and I heard about how good the burgers are at Daily Burger, a small restaurant near the Schwaben Galerie in Vaihingen.  Since we definitely like our burgers, we decided we needed to try it.  Today was the big day. 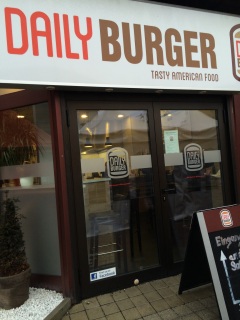 Outside of the restaurant.  I often get a kick out of trying German versions of “American” food.

The weather was pretty miserable today.  It was cold and rainy.  Daily Burger opens at 3:00pm on Sundays.  I figured it wouldn’t be that busy because it was the middle of the day.  I was mistaken.  The dining room at Daily Burger is very small and no frills and every seat inside was taken.  They have a tent heated by propane heaters and the gentleman ahead of us requested to sit out there with his daughter.  Bill and I decided to join them, since there was nowhere else to sit.  But first, we had to make an order.

Daily Burger has a small menu.  You can get a beef burger, a chicken burger, or a veggie burger.  They also offer chicken wings.  You have a choice of three buns: sesame, hell, or koerner.  Bill tried the koerner bun, while I had the sesame bun.  There are several available free toppings which include tomatoes, raw onions,  roasted onions or pickles.  You can also pay extra for an egg, cheese, bacon, rucola, an extra patty, or jalapeno peppers.  Mustard, ketchup, and mayonnaise are free, while barbecue sauce is extra.

Bill and I both got combos, which include pommes and a drink.  I had a Coke and Bill had a Mezzo Mix; they came in small bottles  The lady who helped us spoke perfect English and was efficient as she took our orders.  She handed us a beeper and we went outside to wait.

On a nicer day, it wouldn’t have been bad at all to sit in the tent.  The heater was somewhat effective in warming the space.  I could still see my breath, though, and my hands were freezing during the short wait for our order to be prepared. 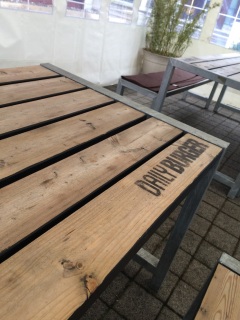 Nice tables outside.  I sat right under the heater.  Bill insisted.  On a nice day, this might even be preferable to the indoor seating, since it’s very no frills.  Today, it was very bitter cold. 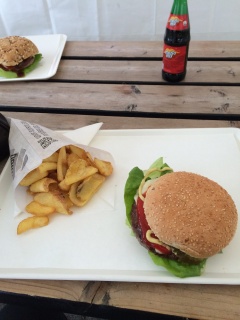 My cheeseburger.  It had mustard, ketchup, pickles, and lettuce.  The patty was very thin and tasted like it might be beef and pork mixed.  It was piping hot when I got it and the bun tasted very fresh, like it had been made on the premises.  I really liked the bun.  The fries were also delicious, but there were a whole lot of them.  Bill and I each only managed half.  Next time, we’ll order one combo and a burger and share the fries.  I don’t mind having extras, though… they were really good. 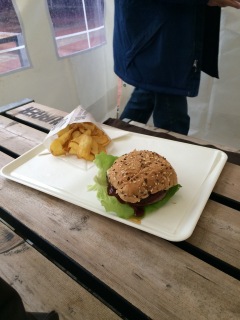 Bill’s sandwich.  He had barbecue sauce, pickles, cheese, and lettuce.  His sandwich seemed bigger than mine.  Both had a lot of condiments on them, to the point at which they were pretty messy.  I could have used another napkin.

Total damage for this lunch was about eighteen euros.  We both liked the food well enough, though it was definitely not Five Guys.  Next time, I may try the chicken or the wings.  I think I might like that better than the burgers.

I was so chilled after eating outside that I decided we needed to visit The Auld Rogue for a pint and maybe a little nip of scotch.  After dropping off our leftover fries, we walked over there and came in just in time for some live music.  A group was playing Irish music.  The first thing I did when I got there, though, was to hit the ladies room because I didn’t see one at Daily Burger.  To be fair, I didn’t look for one in the crowded restaurant.  It was too awkward.

A young girl standing in the hallway was playing with a tablet and said something to me.  At first I didn’t hear her.  She repeated herself in German.  I didn’t understand and said so.  She asked me if I’d been crying!  No… I was just looking a little like a drowned rat with too much eyeliner and a strong urge to pee. 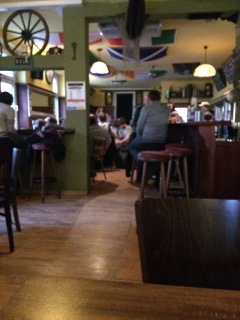 The view from our table.  Bill ordered us a round of Guinness… 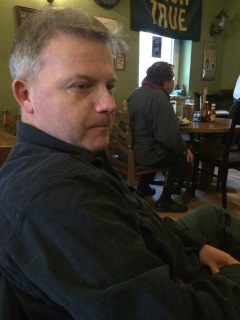 Another obligatory shot of Bill right before he ordered me a large Ardbeg to help ward off the chill.

I had to have a shot of the Irish True flag.

The band was decent, though I think they could have used another singer.  One lady sang and wasn’t bad, but they seemed more into playing than singing.  I heard a few harmonies and one guy was a decent singer, but I couldn’t hear him as well over the jamming.  Never mind, though… it was entertaining.  I especially liked it when they sang “Always Look On The Bright Side of Life”.  I noticed a couple of Christy Moore songs, too.  Later, after the broke up, it became clear that they were Germans doing a pretty good job of playing Irish music.

We talked to the proprietor, Nick, about a trip to Ireland The Auld Rogue is planning for Memorial Day weekend.  That may be a trip I’ll have to do…  Nick said it would include some stops at distilleries and a craft beer festival…  A boozer like me is all over that.  We asked him to send us the info and we’ll see if we can make it happen.

I was surprisingly warm on the walk back to the car.  I suppose a couple of large drams of scotch will do that to a person.  We stopped at the commissary for a few necessary items, since Bill has to go away again soon.