After lunch on Saturday, we loaded up the dogs and set off for Chateau de Chateauneuf, the awesome 15th century fortress and chateau we noticed from the motorway as we were making our way to Semur En Auxois.  Bill decided he didn’t want to go on the highway, so we took back roads through some very pretty villages.  I noticed that things seemed a little quiet on Saturday, but we had such beautiful weather, at least until we got up on the hill.  It was a great day to go exploring.

We were in Chateauneuf too early to visit the chateau, which opened at 2:00, and I doubt the dogs would have been welcome, anyway.  However, the little village next to it was very charming.  Since we were on a hill, we got some great views of the area.  I took several photos. 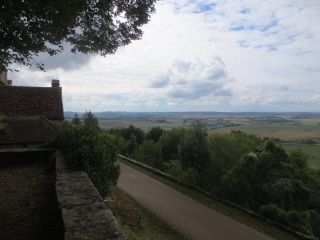 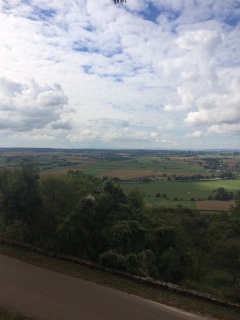 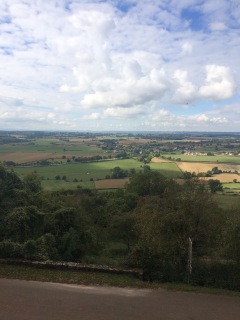 I probably could have sat on the hillside taking photos all day…  But the clouds were rolling in, so we decided to keep exploring.

We parked for free in a generously sized lot and walked around.

The entrance to the chateau offered information in several languages.  When the weather is warmer, this little village bustles with activity.  It was fairly quiet when we visited, though.  On the way back to the car, we ran into a local lady who admired our beagles.  She didn’t seem to speak English, but she knew what we had and was very pleased to greet them.  I am proud to note that her cat was sitting on the front porch.  Zane noticed and took interest, but never uttered a word.  Arran was oblivious, thank God!

If the weather had been a little less cloudy, we could have taken a stroll in the hills.  This sign tells visitors how long it takes to get to points of interest. 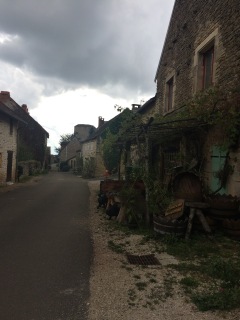 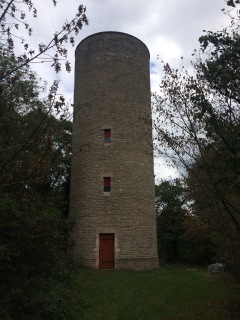 Chateauneuf is definitely a place I want to explore sans dogs.  But if you do have your dogs, you can enjoy some lovely walks.  I noticed several gites (rooms for rent), too.

We enjoyed good music and conversation as we drove along the country roads.  I saw several places that begged for me to jump out and take pictures.  We did stop at one point because someone failed to use one of those handy dog clean up stations.  We noticed others had stopped on the side of the road.  Unlike Germans, who take walks to take walks, I had a feeling there was something going on in the wooded area near where people were parked.  But I decided to wipe the poo off my shoe and keep going…  and we ended up in the lovely abbey town of Flavigny Sur Ozerain next. 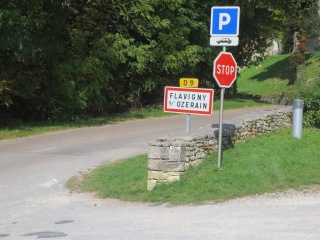 A sign…  The 2000 movie Chocolat, starring Juliette Binoche and Johnny Depp was shot in Flavigny Sur Ozerain.  It is also the only source of the anise flavored candy Anise de Flavigny, which was first made by the monks. 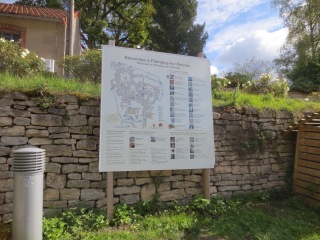 While we were walking through this town, we ended up having yet another encounter with a local.  Two little old ladies were chatting as we rounded the corner with our dogs.  One of the ladies was in her house, looking out the window.  She did not speak English, but was bound and determined to chat with us about Zane and Arran.  She asked us how old they were, if they were brothers, and curiously enough, why they didn’t have their balls.  Actually, at the time, I was trying really hard to understand her because I never studied French in school.  I stuck with Spanish.  Curiously, I seemed to be picking up more of what she was talking about than Bill was.  And I caught myself answering in German a couple of times (and my German is only slightly better than my French).

Anyway, I posted about this odd conversation on Facebook.  Of course, my American friends wondered if there was a pet overpopulation problem here like there is in the United States (not that I’ve noticed).  But here in Europe, dogs aren’t spayed and neutered as often as they are in the States.  My German friend, Susanne, explained why, at least in Germany, a lot of dogs retain their equipment.  Indeed, there is a law that covers it.  That doesn’t mean you can’t get your animals castrated in Europe; but apparently, it is discouraged.  According to a 2011 article I found, it’s illegal in Norway.  You can read more about the cultural differences between Europeans and North Americans and spaying and neutering here.  Interestingly enough, there have been some folks in Germany who have noticed our dogs are neutered and they seemed puzzled by it.  Now I know why. 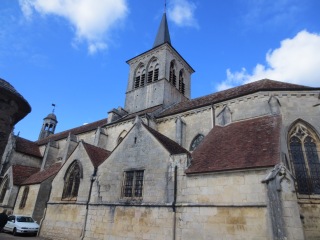 A couple of shots of the beautiful church in Flavigny.  It’s very quiet and peaceful there. 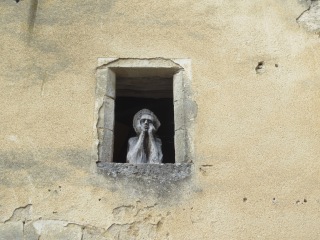 Right across from the abbey…

A World War I and II memorial… 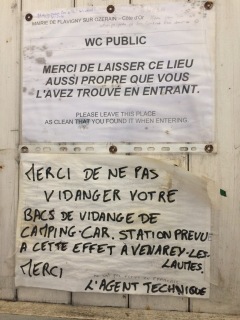 Another welcome sight was the public (and free) WC.  It was pretty clean.  People must have read the sign!  I noticed that the French seem much more liberal with free parking and WCs! 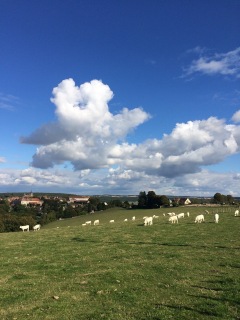 The sun was out again as we left Flavigny…  I caught some good photos.

We were all pretty tired after our three walks on Saturday, so Bill went out and bought food from the grocery store, along with more wine… and a lovely lemon meringue tart for dessert!

What a lovely dessert!  It capped off a great day!